Skip to Content
Table of Contents
Sublime Succulents may collect a share of sales or other compensation from the links on this page.

Crassula mesembryanthemoides is a small succulent that can be recognized by its hairy stems and leaves. The leaves are bright green, fleshy, and covered with soft white hairs. The stems are also covered in soft hair but turn reddish-brown and woody as the plant ages.

At maturity, this succulent reaches only about 16 inches in height. It’s a shrub-like succulent, so it’s often about as wide as it is tall. Each leave is elongated with a pointed tip and measures less than half an inch long.

C. mesembryanthemoides blooms in the fall and winter and produces tiny bell-shaped flowers that are white or cream in color. The flowers grow in clusters at the ends of the branches.

There are a few different cultivars of this succulent that can be found. They all require about the same care, but they differ slightly in appearance.

This cultivar closely resembles the original, but with a bluish-gray tint to the leaves. The hairs covering this plant are shorter and finer, leading to a more velvet-like appearance. The succulent’s coloring combined with the hairs gives the plant a silver or frosted look.

This succulent is unique in that no one really knows much of its origins. It’s suspected to either a cultivar of Crassula mesembryanthemoides or a hybrid. This mystery along with the bright red or violet flowers led to the nickname ‘Surprise Party’.

Despite the unique appearance, Crassula mesembryanthemoides is just as easy to care for as any other Crassula. They are an excellent choice for any succulent caretaker, regardless of experience level.

As with other Crassula, C. mesembryanthemoides does best in bright, indirect light when grown indoors. A south-, west-, or east-facing window is ideal. These succulents do not typically do well in low light environments.

If you’d like to grow Crassula mesembryanthemoides in a low light indoor environment, you’ll need to supplement with a grow light to ensure your succulent gets the light it needs to grow and develop properly.

Without enough light, your succulent will likely become etiolated, or stretched out, as it searches for better lighting. Though this won’t actually harm your plant, many gardeners find it unsightly.

If you’d like to grow Crassula mesembryanthemoides outdoors, be sure to plant it in an area where it can receive filtered or partial sun. These plants enjoy bright light, but they should be protected from the sun’s afternoon rays to prevent sunburn.

As with any other Crassula, you should never overwater Crassula mesembryanthemoides. If you’re going to make a watering mistake, it’s best to err on the side of dryness.

This is a succulent that prefers to be watered deeply, but not frequently. To prevent root rot from developing, it’s best to allow the soil to dry out before watering.

Always check the soil before you water to make sure it’s adequately dry. You can use a soil moisture meter or your finger to check for moisture, but if the soil feels moist, you need to wait a few more days and test again.

Checking the soil first is crucial in preventing accidental overwatering, rather than watering on a set schedule. The environment can change from week to week, so your plant may need watering more or less frequently due to changes in temperature or humidity.

Crassula mesembryanthemoides is not a cold-tolerant plant and will not survive a hard frost. If you have your succulents outdoors, you should bring them inside or cover them if you’re expecting below freezing temperatures.

Though these plants may survive a light frost, they will not survive consistently low temperatures.

Crassula mesembryanthemoides can be tolerant of extreme heat, as long as it is kept out of direct sunlight during the hottest parts of the day. Just remember to water your succulents more frequently during heat waves as they will lose more moisture to evaporation than usual.

When grown indoors, temperature generally has little effect on the wellbeing of Crassula mesembryanthemoides. However, it may be best to protect the plant from sudden drafts just to be safe.

Crassula mesembryanthemoides thrives in well-draining, well-aerated soil. Instead of water-retaining soil ingredients like clay or peat moss, look for soil with large particles of gravel, coarse sand, or perlite.

As with most succulents, C. mesembryanthemoides does not do well with overly moist soil, so you want a soil mix that accommodates that. Look for a commercial soil mix formulated for succulents and cacti.

If you like to do things yourself, you can also make your own soil mix by combining the necessary ingredients. Starting with a commercial mix and altering it as needed is also a relatively simple way to create a succulent approved soil.

When growing Crassula mesembryanthemoides outdoors, proper soil is still necessary, so make sure the soil in your outdoor garden can drain quickly. If it doesn’t, consider planting your succulents in raised beds or a berm to encourage better drainage.

Getting your soil mix right won’t help your succulents if you choose a container that doesn’t allow excess moisture to escape. Just say no to pots without drainage holes, unless you’re willing to drill the holes yourself.

If you’re new to succulent propagation, don’t worry. C. mesembryanthemoides is just as easy to propagate as it is to take care of. There are several different methods of propagation available, so if one doesn’t work for you, you can always try another.

The easiest and fasted method of succulent propagation is offset separation. As your Crassula mesembryanthemoides grows, it will produce tiny versions of itself around the base. These offsets, also known as pups, can be easily removed with a gentle hand or a sharp, clean knife.

Offsets should be cut or pulled away from the mother plant with the line of separation as close to the mother plant’s stem as possible. This way, you’re taking most of the offset’s roots with you.

Once you’ve separated the offsets, you can let them dry in a warm area away from direct sunlight for a few days. This gives the open wounds a chance to callous, protecting the baby Crassula from damage.

After the offsets have had a chance to callous, they’re ready to be planted in a new container. You can care for these tiny plants just as you would a mature Crassula mesembryanthemoides.

Stem and leaf cuttings are a popular method of propagation as it doesn’t take much of a plant to grow a new one. Start by removing a portion of the stem or a single leaf from the base of the mother Crassula mesembryanthemoides. Be sure to use a sharp, clean pair of shears or scissors.

Just as you would with offsets, allow the cuttings to callous before placing them in well-draining soil. You can also dip the cuttings in rooting hormone powder prior to placing them in the soil. This powder encourages faster rooting, but it isn’t necessary for normal propagation.

Keep the cuttings out of direct sunlight, but still in bright light, until you begin to see tiny roots growing from the cuttings. Once the roots appear, you can water your cuttings as you would any other Crassula.

It’s also possible to grow Crassula mesembryanthemoides from seeds, but it’s not a common method of propagation as it tends to be quite time consuming. Seeds can be collected from your existing plants after the flowers have dried, or you can buy them online.

For more information about growing succulents from seeds, check out our guide. 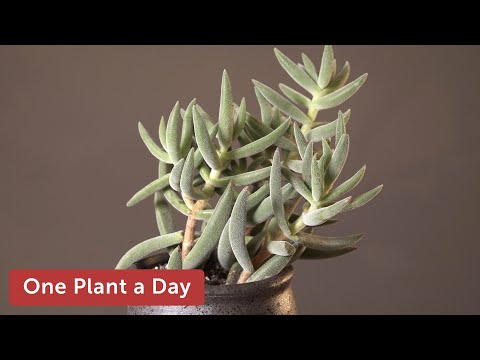