As far as succulents are concerned, there are two main types of succulent substrate: soil and grit. The line between them can (and often does) blur, but it's important to know the difference.

In this article we compare and contrast the two types of substrate, as well as take a close look at the two best examples of each that are available on the market today!

Soil is a mixture of degraded rock, clay, and decayed organic matter. The organic matter (sometimes referred to as just OM) is the important part of that recipe. Organic matter holds nutrients, of course, which all plants need, but it also holds water.

Sorry for the chemistry tangent. Soil has dead stuff in it, and dead stuff holds water. For most plants, that's a good thing.

What is a gritty mix?

Gritty mix isn't a scientific term like soil, it's a commercial term for a horticultural substrate with little or no organic matter. A typical gritty mix will have ingredients like:

Of all the things in that list, the only organic matter is pine bark. And anyone who is familiar with pine bark knows that it is more rock than plant.

Gritty mixes are supremely well-draining. Not only is the average particle size very large (so it doesn't compact and has lower relative surface area for water to cling to), but pretty much every ingredient is inorganic so water doesn't feel compelled to stick around. The large gaps between particles ensure there is lots of airflow and it dries out quick.

Is Succulent Soil or Gritty Mix Better for Succulents and Cacti?

As you might have guessed, the answer is "it depends". Here are some factors that influence the best substrate for your fat plants: 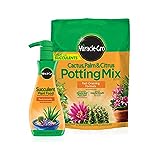 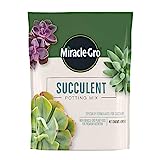 "Succulent" is a term that encompasses a huge variety of plants, so their needs vary a fair bit. Some succulents, like Kalanchoe for example, like a lot of water. There are succulents that don't mind being damp for a while, like many of the trailing succulents and most Sansevieria and Crassula.

On the flip side, we're all familiar with the succulents that threaten to keel over at the mere thought of water. Lithops are perhaps the most famous example, but you have to be careful with many species of Haworthia and lots of cacti too.

Here's a very scientific scale I made to give you a frame of reference for how well different substrates drain. Plants that like it a little wetter will prefer a substrate that's more to the left side; most succulents and cacti start somewhere on the right half.

So even though we're comparing (a great) succulent soil and gritty mix in this article, the truth is that they are both on the same end of the spectrum. Both products we discuss drain water much better than average.

A Review of the Best Succulent Gritty Mix: Bonsai Jack

Have you ever seen those pretty succulent pictures on Instagram or Pinterest, but the thing that draws your eye most is how nice the substrate is? You can tell it's not just top dressing because the plant looks vibrant and healthy.

That's what Bonsai Jack is.

It feels like a bespoke plant supply in the same way a badger hair shaving brush and shaving soap make you feel as suave as James Bond. When you pour water over it, there's a soft hiss as the water runs through to the bottom of the pot. It's aesthetic and satisfying.

More importantly, though, Bonsai Jack is very effective. It dries out in a matter of minutes, so root rot hasn't even crossed my mind since I started using it. Since the succulents are only moist for a moment, gritty mix has the hidden bonus effect of giving you leeway to water succulents more often... which means they grow faster.

There are other gritty mixes out there. Akadama is a popular one, primarily used by bonsai practitioners, but it costs about a million dollars. Bonsai Jack is far-and-away the most popular gritty mix for succulents because it is affordable and effective.

See also
Can You Clean Up Plant Soil With A Vacuum?

I would highly recommend it for your drier succulents and cacti. It's honestly been a game-changer.

A Review of the Best Succulent Soil: Black Gold

Having purchased a variety of commercially-available substrates labeled "succulent soil", I didn't have high expectations for this one. In my experience, they tend to be regular potting soil with a little extra perlite, hardly anything to phone home about.

That is not the case with Black Gold.

It turns out there's a reason why everyone raves about it. It's truly a cut above the competitors. There's a pretty fine line to walk between "too much organic matter" and "too much inorganic matter", but this succulent substrate nails it.

The first thing you'll notice is that it's a dark, rich-soil with a generous helping of inorganic chunks. Almost half of the mix is perlite or pumice; a further third is the same pine bark used in gritty mixes. The remainder is a mixture of compost, worm castings, and other fertilizer.

It does hold moisture for about a day or so in my experience. That's not bad, and the trade-off is a nutrient-rich substrate that accelerates plant growth (and greatly reduces the need for fertilizer). My slightly wetter succulents, Kalanchoe mostly, love the stuff.

Sun Gro's Black Gold Cactus Mix is overall the best succulent soil out there, no contest.

Conclusion: Match Your Substrate to Your Plant

It's not the answer you wanted to hear, but it's the truth. There's no silver bullet for succulent soil. Every plant has specific needs and you can't really hone in on them until you've had some practice caring for it.

That being said... it would be hard to go wrong with either of the two substrates reviewed here. Both of them will make it practically impossible to overwater your succulents. You can also make your own approximation of these at home using the ingredients mentioned!

Want more soil recommendations? Here's our list of best succulent soils, and this is the ultimate guide on everything you'd ever need to know about dirt and fat plants.