As you may remember from your grade school science classes, all living things are classified into different groups and subgroups. This classification process is called taxonomy. The purpose of taxonomy is to help scientists organize the life on earth in a way that becomes easier to understand.

As with all life on earth, succulents must be categorized in way that allows both scientists and succulent lovers to understand which plants are more closely related and which are completely different despite similarities in appearance.

If you’re having trouble remembering the hierarchy of taxonomy, also known as the taxonomic rank, don’t worry. Most of us didn’t expect to be quizzed on this after leaving school. In order, from the most general rank to the most specific, all living things are classified by domain, kingdom, phylum, class, order, family, genus, and species.

As you may already know, the scientific name for various types of plants or animals comes from the genus and species. For example, Aloe polyphylla and Aloe aristata can be recognized as being of the same genus, Aloe, but of different species. Remember, the genus is always capitalized, while the species remains in lowercase. Scientific nomenclature is standardized and is universal, so no matter where you’re from you’ll be able to recognize a plant by its scientific name. 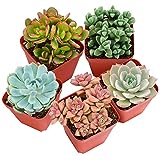 Common names, on the other hand, may vary by language or region. For example, the common name for Aloe aristata is Lace Aloe, but may also be referred to as Torch Plant, Bristle Tip Aloe, or even Guinea-Fowl Aloe due its similarity in color and pattern to the birds of the same name.

See also
How Do Succulents Reproduce

The Problem with Taxonomy

Categorizing living things is a complicated task, even for scientists. Prior to the invention of DNA sequencing, plants and animals were categorized mainly by their ecological role and their physical appearance, or morphology. However, this wasn’t the most accurate way to distinguish different species from one another.

If you were to categorize succulents by their outward appearance, you may have trouble distinguishing certain species of Aloe from Haworthia. Many species of Echeveria can easily be confused with Sempervivum due to their similarities.

As science becomes more advanced and scientists start to take internal characteristics, such as DNA, into account taxonomy becomes even more difficult. Some plants are recognized as being more closely related to others than previously thought, while others are discovered to be more distantly related.

Succulents are well-known for their water retaining abilities and fleshy leaves or stems. The ability to store water in arid climates is what makes a succulent a succulent. However, it’s important to consider how cacti are factored into this category. Remember, while almost all cacti are considered succulents, not all succulents can be considered cacti.

To be considered a succulent, a plant must have the ability to store water within its leaves, roots, or stems for long periods of time. The plant must originate from a dry climate with little rainfall or humidity. Succulents are made to withstand long periods of drought so they may possess certain characteristics to help them retain water. Features such as a waxy or hairy outer surface, compact shape, tough outer skin, and the ability to perform photosynthesis in the stem rather than just the leaves can help succulents and cacti survive life with infrequent water. If a plant meets these requirements, it can be considered a succulent.

To add to this already complicated matter, succulents do not belong to just one family or genus of plants. Over 25 different plant families contain plants considered to be succulents. However, not all plants within these families are succulents.

As scientific advances change the way plants are categorized and named, you may notice some of your favorite succulents being referred to under different scientific names. It can be somewhat confusing the first time you encounter a plant with a new name. Seeing a plant you recognized as Haworthia fasciata labeled as Haworthiopsis fasciata can be disconcerting when you thought you were finally grasping an understand of different succulent species.

Why Taxonomy is Important

As a gardener who is passionate about your succulent and cacti collection, you may be wondering why succulent taxonomy is important and how it affects you. Unless you’re studying for a degree in botany, you may not think that an understanding of plant categorization has any effect on you.

However, it’s important to understand that the more closely related two plants are, the more similar they’ll be in terms of care. Even though your favorite Echeveria looks a lot like your new Sempervivum, only one of them is likely to survive outside during the winter. As another example, members of the genus Haworthiopsis are all endemic to Southern Africa, so you can assume that they all live in a relatively similar climate. This information is helpful as it means that you’ll be able to make general assumptions about a specific plant’s care based on its genus.

If you have any interest in breeding succulents, you’ll also need to know how closely your plants are related. Succulents species that are closely related to each other can be hybridized, but you’d be wasting your time on plants that are too distantly related to be interbred.

So, while taxonomic ranking is a rather complicated scientific endeavor that can be confusing to the average layperson, it’s an essential part of the scientific study of plants. It can also affect the way you care for your plants and how they reproduce. You don't need to pursue a PhD to understand your plants, unless you want to, but it doesn't hurt to learn a little more about the succulents and cacti in your garden or collection.