Lithops are simultaneously the easiest and the hardest succulents to care for. They practically demand to be ignored; you'll find they fare far better with little intervention.

But alas, they are too interesting to be ignored completely. What follows is the most comprehensive guide to lithops on the internet.

Lithops is the scientific name of the genus, but it is also often used as a common name. It stems from lithos (rock) and opsis (similar to).

Other common names for these fat plants include:

In Namibia, the locals refer to them as "cattle hooves" or "sheep hooves" due to their hoof-like appearance.Lithops hail from southern Africa or South Africa, where you'll find cacti like Split Rock Succulents or Senecio Haworthii. They are found in very arid regions, some of which receive less than 4 inches of rain a year! This is the driving factor in why they look so strange - water conservation. 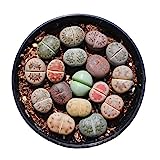 While all succulents are adapted to conserve water, none do it so well as the Lithops. They rarely drink at all, and when they do, it isn't very much. In fact, some wild Lithops never see rain. They survive by drawing moisture from mist or fog a few times a year.

The Lithops'unusual shape is for more than just water conservation, however! In the wild, they grow level with the surface of the ground, mixed in amongst the rock and sand.

It's very difficult for even for experienced horticulturalists to find wild Lithops, so you can imagine that grazing animals have an even rougher time of it. Even more fascinating is the way they get sunlight. It probably occurred to you that, being underground and all, only the very top of the plant gets any sun.

Well, those flat-tops are comprised of cells that act as windows, allowing the light to penetrate deep into the plant where it can reach more chlorophyll. This ingenious adaptation lets them live underground, safe from predators and from the sun.

The structure of the plant is fascinating, too.Lithops don't have a true stem. They usually have two leaves that taper down in a conical fashion directly to a taproot.

The roots are large compared to the plant, up to 6 inches, so a deep pot is necessary. An older specimen of some species will have more than one pair of leaves connected to the same root, and they grow in a crowded cluster.

You might be interested to know, there are tales of people using these plants for water in emergencies. It certainly fits with the stereotype of eating cacti when lost in the desert! Whether or not that is true, it is a fact that Lithops are non-toxic to people and animals.

Look here for some cacti and succulent plants that are definitely edible.

Like most succulents, Lithops are from arid regions. Because of that, they require fast-draining soil. Sublime Succulents has written all about succulent soil.

But these guys in particular usually require even more specific soil types. You see, they're basically rocks. Rocks that grow a little bit. Rocks like to be around other rocks. That's why we recommend you plant your Lithops in a growing medium with very little organic matter. One-half succulent soil mixed with one-half perlite is acceptable, but the less soil you have the better. The optimal growing medium for Lithops is one heavy with perlite, coarse sand, gravel, pumice, and/or lava rocks. Approximately ⅕ of the medium should be organic matter (soil) and the rest should be mineral. In fact, Lithops do very well in a soilless medium. They don't really need dirt, as it turns out.

See also
How to Treat Scale on your Succulents and Cacti

When you purchase new Lithops or find another reason to repot them, you should try to do it during a growing season (spring or autumn). The best time to replant succulents is right before you water them. Watering helps promote new root growth and helps to stabilize succulents in a new pot.

However, if you need to replant Lithops at a time when you shouldn't be watering (summer or winter), just don't water it.

This is the most important part of Lithops care - and the one that most people get wrong.By the time succulent enthusiasts acquire their first split rocks, they've probably been growing for a while. They know all about basic succulent care and have propagated many a fat plant.

But Lithops don't follow those same rules. They have a very distinct seasonal cycle that determines watering schedules.

Do NOT water! They are dormant during the summer, and any watering could kill them. They expect this season to be bone-dry with no humidity or rain.

Watering will cause them to become mushy and rot. Make an exception only if they become very wrinkled - then you can water a very small amount of water and they will plump up again within a week.

In the early autumn, Lithops resume growth. The first sign is often a bud that forces its way out from between the leaves. This shoot becomes a flower, and you can often see the beginnings of new leaves around this time.

Jump-start the growing process by giving it a full watering at the beginning of this season, entirely drenching the plant. Continue watering as necessary. Remember to never water a succulent if the soil is still damp from the last time.

Do NOT water! During this season, the new pair of leaves are drawing water from the old ones. They will appear to shrivel over time, and the new pair will steadily grow. If your water, the old leaves will try to drink it, which ultimately confuses the plant's growth and will cause both sets of leaves to die.

See also
How to Save an Over Watered Succulent

Just leave your Lithops entirely untouched during this season. Additionally, make sure they are not exposed to temperatures below 55°F. They are made of mostly water and don't do well in cold temperatures.

Once the old leaves have shriveled up into paper-like husks, you may finally remove them and resume watering. Water lightly to encourage the new bud to begin growth, then gradually increase it to full waterings as necessary.

If you follow these guidelines on watering, your Lithops should live a full life (40-50 years). Be aware that for some Lithops, watering may only be necessary 3 or 4 times a year. For others, you can water them every couple of weeks during their growing seasons (spring and autumn).

When it is time to water, water them like any other succulent - pour water near the base of the plant until the soil is drenched and water begins to drain out of the bottom. If in doubt, don't water until you see visible wrinkling on the leaves.

You will still have plenty of time to rectify any thirst problems before permanent damage comes to your plant. If possible, water in the morning. This allows the water to evaporate during the day, and less harmful moisture is retained in the roots.

Like all succulents, Lithops love lots of sunlight. Place them in a place with lots of direct light. If you're in the Northern Hemisphere, a south-facing window is ideal.

Flip that if you're in the Southern Hemisphere. Lacking an ideal window, a grow light might be necessary to supplement their light. If your plant begins to grow elongated or leaning to one side, it is suffering from etiolation. While not inherently harmful, it is not especially aesthetic.

If you're just bringing home a new pal from the store, be cautious about introducing it to bright light too quickly. Sunburn is a very real issue for succulents.

Either use a shade cloth initially or put them in an area with less direct sun. You'll want to work them up to about 5 hours a day of direct light, and the remainder of the day in indirect light.

See also
How To Transplant Propagated Succulents After Beheading Them

Proper lighting is important in maintaining the vibrant coloring of succulents.

As you well know, lots of succulents can be propagated via leaf. Unfortunately, Lithops only have two and they need them both! Some species will grow more than one head, and the pairs of leaves will bunch up around a shared root system.

This often takes many years to develop, but if you find yourself in possession of such a Lithops, you can separate the roots and split up the buds to have more plants.

The most common way of rearing new Lithops is via seed. You can order mature plants online, but if you want a lot of them and don't mind waiting, you should buy some seeds and get sowin'.

Growing Lithops through seed is similar to most other succulents. Here's an article about how to grow cacti and succulents from seeds.

In fact, if you have a few Lithops, you can get your own seeds! Their flowers look just like daisies and range from white to yellow to orange. During autumn, when the flowers open up, cross-pollinate them.

They don't self-fertilize, but you can use a Q-Tip or a paintbrush (or a plant-pollinator) to transfer pollen from one flower to another. When the flowers die they leave behind pods that open up when doused in water. You can open them manually, of course, and collect the seeds. 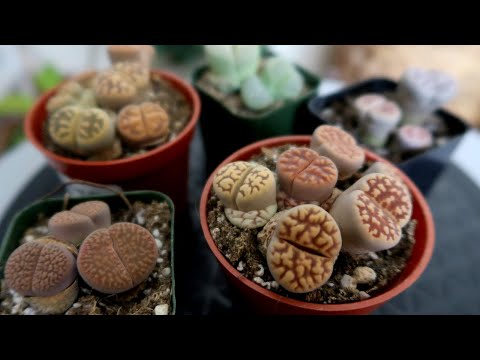 Check out this lithops video care guide if you want some more help now.

Q: How can I tell if my lithops are dying? A: Succulents are hardy plants that can survive hot, tough conditions; however, growing them in a domestic environment can be challenging, especially if you live in a climate that is less than ideas.

Overwatering and insufficient sunlight are the biggest succulent killers. Too much water ca cause rotting. Lithops are succulents that prefer not to be overwatered.

The following are signs that your plant is deteriorating:

Q: Can lithops be planted indoors?
A: Yes, lithops are a unique addition to your home, and as long as they are grown in a sunny part of the house, they can thrive.

Q: Are lithops rare? A: Lithops grow very slowly. Their seeds could take up to a year to germinate, and propagating this plant is also rather challenging. The combination of these factors makes lithops plants rare, after all, they are like flowering stones popping out of the soil surface!

Q: Why are my lithops wrinkly? A: Lithops may become wrinkly if they are underwatered or if they are exposed to too much or not enough sunlight. If you notice your lithops plant has become wrinkly, you should move it to a different area of your home or garden and change your watering schedule.

Q: Do I need to prune my lithops plant? A: Lithops do not need to be pruned, but if you feel like your plant is looking messy, you should follow a lithops pruning guide to see what should be done. Lithops look like stones and therefore the plant stays rather compact.