Crested and monstrose succulents are weird, wonderful, and very wacky.

They're not fundamentally different from their regular counterparts, though. They just have a different growth pattern.

The way to identify a crested plant when using it's scientific name is by looking for a 'cristate' at the end. Graptopetalum paraguayense cristate is a crested ghost plant! Monstrose already sounds pretty Latin-y, so there's no need to change that one up.

How Does a Plant Become Crested?

In order to understand the answer to this question, you need a little background on how plants grow.

You know how humans have stem cells? They're undifferentiated cells; cells that haven't specialized into anything. They're not muscles or bones or organs. They're like the "children" of the cell world - they have the potential to grow up into anything.

Plants have the same sort of cell, but we call those meristematic cells. It's analogous to an animal stem cell.

At the tip of every growing stem or a shoot is what's called the apical meristem. The apical meristem is a bundle of cells that are constantly growing and dividing - they push the new division behind them and keep moving forward. That's how stems (and roots) grow outwards.

How a Crest Forms

Usually, the reason a succulent becomes crested is because it suffered damage to its apical meristem.

Most of the time, it's physical damage. That tender new shoot was bumped, scraped, or cut. It might have been munched on by a bug. Maybe it was tragically injured by someone tossing a rock into a garden bed.

That injury just happened to be on the very tip of new growth, and it just happened to divide the apical meristem cells in half. The, they miraculously survive and continue to grow (albeit in a modified fashion).

Does that sound extremely unlikely? Well, it kind of is. That's why crested plants are pretty rare.

Much less common is a crest formed because of a genetic error. A mutation. 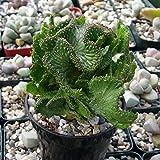 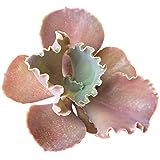 It's certainly possible - cells mess up when dividing all the time. However, plants' and animals' bodies have safeguards in place to identify and destroy cells that divide incorrectly (because that's how cancer starts!).

Difference Between Crested and Monstrose

Crested and monstrose plants are formed through much the same processes. Those words just describe the modified form of the plant.

Have you ever noticed how crested succulents tend to have two planes of symmetry? There's a line where things divide, and each side is more or less a mirror of the other.

That line is where the apical meristem was divided.

Crested plants usually also grow more "outwards" compared to their normal counterparts. They're a bit flat, not as tall, and much wider.

Have you ever seen a cheese or a meat extruded from something? Or used a garlic press? You've seen all those little individual "noodles" come out and go in different directions?

Well, that's pretty much what a monstrose plant is. The damage that caused the condition wasn't quite as precise as a cut through the middle of the apical meristem. It's a miracle that the meristem is still growing at all, and it gets pretty wacky.

Monstrose growth tends to be wild and unpredictable. It can be hard to tell what species of plant it is, sometimes.

Can Plants Other than Succulents be Crested?

Crested and monstrose varities are not unique to succulents! Any kind of plant can be crested!

You see crested succulents more often than others for a couple reasons. First is that succulents tend to be hardier than most other plants. They're more easily able to endure adverse conditions and survive injuries.

The other is that there is a dedicated market for crested succulents. Those coral cacti you see at Home Depot? Those are crested Euphorbia lactea (and not actually a cactus, sorry).

Lots of people buy and sell crested succulents specifically. They are "rare" but pretty affordable, comparatively.

See also
Do Succulents Need Drainage? - How Water Them Correctly

Caring for Crested and Monstrose Succulents

A crested or monstrose succulent is fundamentally the same plant as the regular version. It will have all the same watering, sun, and soil requirements.

The thing to note is that, due to their abnormal form, they are often a bit more sensitive than normal. They might be a little more picky about water. They probably won't enjoy being disturbed or jostled.

Being crested is a balancing act, really. It's not normal for the plant, and they're not very well adapted to the condition. Straying too far from the ideal parameters of care is asking for an issue.

Of course, if you have one of these strange beauties, you'd like to know if you can get more the usual way (by propagating).

The short answer is: probably not.

See, the weird growth is very rarely the result of a mutation. That means the genes of the plant haven't actually been altered. Just the form.

So, the physical characteristics aren't heritable by the offspring. For example: if a man lost his arm in a car accident, you wouldn't expect his future son to also be born missing an arm.

These plants operate the same way.

Where to Find a Crested or Monstrose Succulent

Well, I already mentioned you can find "coral cactus" at Home Depot.

There aren't a lot of commercially-available crests or monstrose plants for sale. There's a limited pool of customers, and they're harder to take care of.

The Succulent Source is an exception. They have several options for crested and monstrose cacti.

Other than that, your best bet is to find one directly from other private sellers.

Etsy has a healthy population of hobby growers that can scratch that itch for you.