These are two popular plants that get talked about all the time! However, both species have tons of common names. Which Mother is which? What's the difference? Where can I get them??

Read on to find out everything you need to know about these two kool Kalanchoe.

Which plant is which?

That's why we have scientific names.

They are supposed to clear up confusion created by people calling the same plant different names.

Unfortunately, in this instance, the scientific names of these plants are also in flux!

The plants were previously part of the Kalanchoe genus, but have been reorganized into the Bryophyllum genus.  Some scientists even consider Bryophyllum to be a section of Kalanchoe, rather than an entirely separate genus. The reason for this confusion is that there is some debate about the results of a recent molecular phylogenetic analysis. That’s science-speak for a DNA test. This causes even more confusion!

Now that you've got an idea of which plant is which, you can read on for some information about the two!

What are the main differences between Mother of Thousands and Millions?

The biggest difference is the shape of their leaves.

Mother of Thousands has broad, tear-shaped leaves. You'll notice that they always grow in pairs, each leaf on opposite sides of the stem.

The next pair of leaves rotate 90 degrees, so that the new leaves don't block the sun from the old ones! This alternate leaf pattern is common in plants and helps ensure all the leaves get sunlight.

If you look at the edges of the leaves, you'll see they have little ridges. That is where the baby plantlets form! These plantlets, or buds, grow all along the edge of the leaf. A happy, healthy leaf will have a full complement of babies around the edge of it.

Leaves also rush to grow babies if they are damaged or think they're about to die.

Mother of Millions, on the other hand, has very narrow leaves. You'll notice that it has 4 leaves that all grow from the same place on the stem (the node).

These don't alternate like the Mother of Thousands. The plantlets on these leaves only grow at the end of the leaf, near the tip. Usually, there are between 2-4 babies on each leaf. 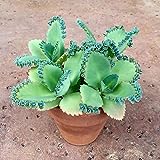 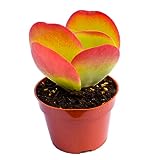 Mother of Millions is considered a noxious weed in parts of Australia and Africa because of its rapid growth and spreading, in even the most adverse conditions.

The final difference in these two Mothers is the behaviors of their growth. Mother of Thousands usually has a central, single stalk that grows up towards the sunlight.

It will often fall over due to the weight of its heavy leaves, and continue growing. Mother of Millions often has several stalks rising from the same plant. While they primarily grow upwards, they can form bush-like patches.

What are the similarities?

Since they are in the same genus, they are very closely related. They are both from Madagascar, and as such, enjoy the same treatment as most succulents in regards to the sun, water, and soil.

They thrive in bright direct sunlight, though they can also do pretty well in indirect light. These two Mothers appreciate the same watering schedule that most succulents do (infrequent, heavy waterings). In the soil department, they want loose, fast-draining soil.

Be sure that the container you plant them in also provides appropriate drainage. Soil that drains quickly won’t do you any good if that water has nowhere to go.

Despite all their preferences, these plants seem to thrive on neglect. I've spotted them growing in sidewalk cracks in Charleston, South Carolina. They've sprouted up in a dark corner after falling from their mother. As with most succulents, they are survivors that are capable of growing in surprisingly harsh conditions.

I've seen them thrive in places that are perpetually wet, a feat unheard of in the succulent realm. Not only do they handle wet climates with ease, but they’re capable of surviving mild frost as well.  Both species are prolific growers. Those little plantlets can and will drop off and grow just about anywhere!

It follows that Mother of Thousands and Mother of Millions are considered by some to be weeds. While "weed" is a subjective term for a plant people don't want around, these two plants sure do act like weeds.

Their method of propagation is extremely efficient, so much so that it has a tendency to overtake other plants and crowd them out. The plantlets that form on their leaves are literally miniature plants.

They are already growing and photosynthesizing while attached to their mother. Most even produce roots in addition to their leaves. By the time they hit the ground, they're already a plant!

That's a huge advantage on those lame, regular plants that have to grow from seeds. In general, succulents tend to be slow growers, especially when grown from seeds. This is why most succulent gardeners choose to propagate their plants from cuttings or offsets. The Mothers have realized this advantage and chosen to go with the more efficient method of propagation as well.

They do produce seeds, although you'll probably never see them. The seeds are usually brown and are quite tiny at less than one millimeter long. The seeds are capable of surviving for years before sprouting.

Their flowers are quite pretty, often orange or red, and sprout from a central stalk. The flowers are pendular, which differentiate these plants from other members of the Kalanchoe genus.

The reason that the Mother plants don't flower too often though. It's easier and more efficient to propagate via buds!

Both Mother of Thousands and Mother of Millions are considered to be noxious weeds is that they are poisonous, unfortunately. The specific toxin in these plants is bufadienolide cardiac clycosides, which causes cardiac arrest in those that consume enough of it. The toxin is present not only in the milky sap within the stem, but the flowers, in particular, are highly toxic. Hybrids of these plants are also considered to be poisonous.

In fact, Australian cattle frequently die from grazing on Mother of Millions, so the plant has a very bad reputation there.  In 1997, a herd of 125 cattle in New South Wales died after grazing in an area where Mother of Millions had taken over. They are aesthetic house plants elsewhere, but you have to be vigilant that they do not spread to other pots or outside your home.

For this reason, we recommend planting your Mothers in containers, rather than in the ground if your climate allows you to grow succulents outdoors. Plant pests such as these are more easily contained when they’re planted in pots, especially if you keep them far enough away from your other pots to prevent them from spreading.

Caring for Mother of Thousands and Mother of Millions is less about helping them grow and more about keeping them from spreading. These plants will take care of their own survival, you just have to make sure you keep them contained.

Where can I get these plants?

Just about anywhere. If you spot one in a public place, you could snag a couple of plantlets off a leaf tip. Be sure to ask the owner of the plant for permission, though  All dedicated succulent owners have come across the Mother of Thousands and Mother of Millions.

If they kept one, they certainly have plenty of babies or saplings to give away. Check succulent Facebook pages that swap plants and succulents in your area. If you have a cactus and succulent society or club in your area, you might ask members if they have any available or know where you might be able to find them. These types of groups are a great resource for succulent information, so they’re usually worth joining, even if they can’t help you find the specific plant you’re looking for.

They are easy to grow succulents, and much loved by beginners.

You can also buy them online, though they are sometimes hard to find because they are considered weeds in some places. Online retailers such as Mountain Crest Gardens often carries both Mother of Millions and Mother of Thousands.

Check also at your local home improvement stores in the succulent section, as these show up from time to time, although always mislabeled.

Some local garden centers or nurseries may also have them, or at least know where you might be able to find them. Don’t be afraid to ask!

Is there any other information you want to know on Mother of Thousands or Mother of Millions? Tell us below in the comments!

« How to Graft Cacti
12 Must Have Succulent Books - Best Reads For Any Level! »