Haworthia retusa, also known as Star Cactus or Window Succulent, is a small succulent known for its uniquely shaped translucent leaves. Despite the name, Star Cactus is in fact not a cactus at all, but rather a soft succulent.

It is native to South Africa, specifically a small area in the Western Cape Province. It grows naturally in low hills and rather a flat terrain. Haworthia retusa is a close relative of Haworthia turgida. The latter species is extremely similar to the former but prefers a rockier, more mountainous habitat.

Haworthia retusa is an extremely popular succulent with gardeners around the world. It’s even won the Royal Horticultural Society’s Award of Garden Merit in the United Kingdom.

H. retusa is a petite succulent, reaching up to six inches in diameter at maturity. The leaves grow in a rosette pattern and are lime green in color. The fleshy leaves have translucent “windows” at the tips with lines running through them. Each leaf measures about 3 inches long and just under an inch wide.

When in bloom, the Window Succulent produces tiny tubular flowers. The flowers are usually white with green or brown veins and appear on stalks up to 20 inches in height. H. retusa typically blooms in late spring or summer.

In the wild, Star Cactus usually grows as a solitary plant, but it’s common to clumps of this plant in homes and gardens.

This adorable succulent is considered non-toxic to both humans and animals, so you can grow it without worrying about the safety of your pets and children.

See also
What to Do If It Rains on Your Succulents

White Ghost is not a commonly seen cultivar that is much more difficult to find than the non-variegated cultivar. Though they are rare, they are a favorite of collectors due to their unique and ghostly appearance.

A hybrid between Haworthia retusa and Haworthia truncata also exists. The hybrid called Haworthia ‘Kegani’ originates in Japan. It is a small succulent, reaching only three inches tall at maturity.

Haworthia ‘Kegani’ has dark, chocolatey-green leaves that grow in two vertical grows in young plants. In mature plants, the leaf pattern somewhat resembles a rosette. The leaves of this hybrid are longer and flatter than those seen on H. retusa. 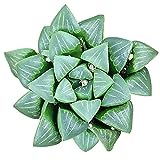 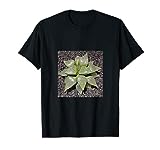 It’s common for Haworthia ‘Kegani’ to change color with stress. When unstressed, the leaves will be a deep green shade but will take on a chocolate brown hue when stressed by sun, temperature, and drought.

Like most Haworthia, H. retusa is not considered a finicky succulent. As long as it receives an appropriate amount of water and sunshine it will do just fine.

It’s common for Star Cactus to be planted in containers and grown indoors, but it’s also fine to grow outdoors if the climate is warm enough.

When cultivated indoors, Haworthia retusa grows best in bright light. In most cases, south, east, or west-facing window should provide an appropriate amount of light. This is not a plant that will thrive in low light environments, so if your indoor space doesn’t provide enough sunlight, you should consider supplementing with a grow light.

Star Cactus can be planted outdoors in containers if the climate doesn’t allow for year-round outdoor growing. Not only do containers allow you to bring the plant inside when it gets cold, but you can also move it around to find the best light if necessary.

Haworthia retusa grows best with partial shade, but they can tolerate full sun as long as temperatures are not too high. High heat combined with the full sun can result in a sunburned and withered succulent.

If you are planning on growing your Window Succulent outdoors, it’s best to acclimate it slowly to increased light levels. Otherwise, you risk sunburning your beloved succulent.

Sunburn causes irreparable damage. If your plant gets sunburned, you’ll need to either wait until new growth replaces the damaged areas or trim away the burned part of the plant.

Prolonged periods in these conditions will result in the death of the plant, so if you notice any burning, move your plant to a shadier area immediately.

To avoid burning your plant, increase its light levels by an hour or so every few days. It might take several weeks for your Haworthia to adjust, but it’s better than putting your plant’s health and appearance at risk.

As with most succulents, Haworthia retusa does not respond well to overwatering. Standing water and overly wet soil should be avoided to prevent root rot.

The best method of preventing overwatering of any succulent is to check the soil before you water. You can do this with either a soil moisture meter or your finger. Your testing tool of choice should be inserted into the soil a few inches.

If the soil feels moist or the meter says the soil is moist, you should wait a few days before testing again. Star Cactus should only be watered when the soil is dry.

By allowing the soil to dry out between watering, you’re simulating the plant’s natural environment and preventing it from suffering the effects of overwatering. This keeps the roots happy and healthy.

H. retusa do experience a period of dormancy during summer, so you should only be watering them enough to keep them from shriveling. You can resume a normal watering schedule in the fall when the active growing season begins.

Window Succulents do not require significant levels of humidity, so if you live in a dry climate, you don’t need to worry about investing in a humidifier or pebble tray. You can do so if you like, but your succulent won’t care.

It should be noted that in high humidity, you’ll likely need to water your succulents less frequently than you would if the air were drier. The humidity will slow down evaporation, so the soil will stay moist for longer periods of time.

Haworthia retusa is not a frost-tolerant succulent and must be protected from frigid temperatures. Though this plant does enjoy cooler temperatures during the winter months, you should be cautious about exposing your plant to cold weather.

As previously mentioned, Haworthia retusa does not enjoy wet soil, so you should avoid any soil that contains water-retaining ingredients like peat moss, clay, and coconut coir. Small amounts of these ingredients are fine, as long as there are an appropriate amount of drainage promoting ingredients as well.

Large particles of coarse sand, gravel, bark, and perlite are ideal for promoting proper drainage. These ingredients will also allow adequate airflow around the roots when the soil is dry.

It’s also crucial to use containers that allow excess water to drain from the soil. It is technically possible to keep succulents in containers without drainage, but it is risky. That teacup might be cute, but you’ll need to be very careful about how you water the succulents planted in it.

In general, Haworthia is incredibly easy succulents to propagate. They can be propagated with leaf or stem cuttings, seeds, or offset division. Regardless of how much succulent experience you may have, propagating your Window Succulent shouldn’t be difficult.

Propagation should take place during the plant’s active growing season to ensure that the new plants have adequate time to establish themselves before entering dormancy.

Growing a Haworthia retusa from seed is the most time-consuming method of propagation, but it can be a fun experiment for any gardener. This is especially true if you can collect seeds from your own plants. Seeds may also be purchased online.

After you’ve sown your seeds in damp soil, it’s important to keep the soil warm and damp until they germinate. Using a seed tray with a dome is an excellent way of ensuring your seeds have the right environment.

It could take several weeks until you begin to see sprouts, but once you do, you can remove the dome. You want your seedlings to be moist, but too much moisture will cause them to rot.

As the seedlings begin to grow, you can start treating them just as you would a mature succulent. Be sure to allow the soil to dry out between watering as normal.

Growing Haworthia retusa from stem or leaf cuttings is an easier and more time-efficient method of propagation than seeds. All you need is a mature plant and a sharp, sterile knife or pair of shears or scissors.

Simply snip off a portion of the stem or individual leaves. You’ll want to leave your cuttings out to dry for a few days to allow the cuts to callous. This prevents any potential infection from setting in once you place the cuttings in the soil.

After the cuts have been calloused, you can place the cuttings in the soil. It’s not necessary to water them until they begin to sprout roots, but you can dip them into rooting hormone before planting to encourage faster root development.

Once the tiny roots appear, you can water the cuttings and treat them just as you would a mature succulent.

Remember, planting several cuttings into a single container will result in a fuller plant once it starts growing, so it can be helpful to take quite a few cuttings for propagation.

Offset division is the absolute easiest method of propagating Haworthia retusa. If your beloved Star Cactus is being kept under the right conditions, it should soon produce tiny pups, or offsets, around the base.

These offsets can then be cut away with a sharp, sterile knife, or carefully plucked from the soil with your fingers.

Try to break the offsets away as close to the mother plant as possible. This will leave the pup with as much of a root system as possible, increasing its chances of survival on its own.

Since these are just tiny versions of the mature plant, you can plant them in their own container and immediately begin treating them just as you would any other H. retusa. The offsets will not require any special care beyond that of a mature succulent.

The biggest challenge that growers face with Haworthia retusa is finding an appropriate watering schedule. Overwatering is the single most common reason these plants don’t survive, so you must check the soil for moisture every time you water.

Of course, this doesn’t mean you should go long periods of time without watering your Window Succulent either. If the leaves appear shriveled or wrinkled, it’s time to water.

Common signs of overwatering include mushy or yellowing leaves, especially around the base of the stem. It is possible to save an overwatered succulent, as long as you catch it before the roots begin to rot.

The most common pests that affect Haworthia retusa are mealybugs, fungus gnats, scale, and spider mites. When it comes to pests, prevention is key. Loose, aerated soil that’s not overly moist and is free from decaying plant material will help deter most pests.

It’s also important that you quarantine any new plants you bring home before planting them in your garden or placing them with the rest of your collection. This will give you a chance to detect any hidden pests and treat an individual plant rather than your entire garden.

Dealing with common succulent pests isn’t fun, but if you can catch an infestation in its early stages, your Haworthia retusa has a higher chance of survival. 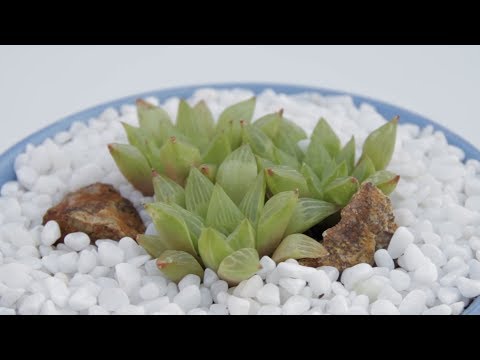