Trichocereus grandiflorus, also known as Echinopsis huascha, is a columnar cactus native to the Puna de Atacama region of Argentina. This is an incredibly tough, but beautiful, cactus that is highly sought after by collectors.

T. grandiflorus is sometimes called the Red Torch Cactus or the Desert’s Blooming Jewel because of its signature blooms, which are produced in the spring. When in bloom, this species produces vibrantly colored funnel-shaped flowers at the end of the stems.

In nature, red is the most common color for the flowers, but yellow and orange may also be found in some areas of their habitat.

Mature Red Torch Cacti can grow up to three feet in height and about four inches in diameter. They are a columnar cactus with branches sprouting near the base. These cacti have sharp spines lining their 12 to 18 ribs. The spines themselves measure between one and two inches in length.

Though the Red Torch Cactus is known for its bright red flowers, this species has been hybridized to create cacti that produce the same flashy flowers in a wider range of colors.

Flowers of these hybrids may now be gold, orange, pink, purple, white, or yellow. Some flowers may even have stripes or more than one color. There are a few hybrids that also have enlarged flowers, some reaching up to nine inches in diameter.

The blooms are not the only visible difference between hybrids and the original variety. The stems of hybrids tend to be a bit more slender and may grow closer to the ground.

If you’re looking for an easy to care for cactus that puts on a yearly floral display, look no further than T. grandifloras. This cactus can be managed by even the most inexperienced gardener, so long as they respect the cactus’ preference for hands-off care.

When grown outdoors, Red Torch Cacti thrive in full sun. In their natural habitat, they have little cover and have adapted to growing under the desert sun’s harsh rays.

These plants will tolerate a bit of shade but will become stretched out or etiolated without enough sunlight. If you live in a climate where winters are mild, you can easily plant this cactus outdoors where it will receive direct light throughout the day. 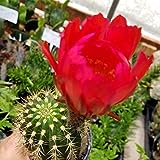 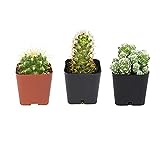 If you plan on growing your T. grandiflorus indoors, you’ll need to make sure it has enough light. A bright, south-facing window is ideal, but a west or east-facing window may also work.

See also
Can You Clean Up Plant Soil With A Vacuum?

Again, these are not cacti suited to low light environments so if your indoor space has insufficient light, you may want to invest in a full spectrum grow light.

As with most cacti, excessive amounts of watering should be avoided with the Red Torch Cactus. Remember, they’re native to a very dry area of the world and have adapted to survive on little water.

During the plant’s active growing season in summer, it will need to be watered sparingly. If the soil is still moist, do not give the cactus more water.

To prevent accidental overwatering, it’s recommended to check the soil’s moisture level prior to watering by inserting your finger or a soil moisture meter into the soil near the base of the cactus.

If the soil is dry, you can proceed with watering. However, if the soil is still moist, you’ll need to wait a few days before checking again.

This cactus will require different watering schedules as the seasons change. During the heat of summer, water will evaporate more quickly, and you may need to water more frequently.

During the winter, you can essentially stop watering the cactus entirely. This species goes dormant for the duration of the winter and will not benefit from watering. In fact, winter watering can put the cactus at risk of rotting.

The Red Torch Cactus is an incredibly resilient species that can tolerate temperatures as low as about 15 degrees Fahrenheit. It is one of the few frost-tolerant species of cacti.

This unique characteristic makes it an appropriate choice for gardeners living in areas where winters are mild but may still reach freezing temperatures on occasion.

However, if temperatures drop below 15 degrees Fahrenheit, you’ll need to bring the cactus indoors to prevent it from freezing.

When grown indoors, this hardy cactus likely won’t be exposed to the same range of temperatures as cacti grown outside. Though these are tough plants, it’s recommended to keep them away from sudden drafts if possible, just to reduce the amount of stress they’re exposed to.

As with most cacti, Trichocereus grandiflorus requires fast-draining soil consisting of a mineral-based substrate. Look for soils containing coarse sand, perlite, gravel, and pumice. These ingredients promote proper drainage and encourage better airflow around the roots.

Avoid soils with clay, peat moss, and coconut coir if possible. If you’re buying a commercial soil mix, look for mixes marketed for cacti and succulents rather than those formulated for flowers and vegetable gardens.

If you intend to grow your Red Torch Cactus in a container, look for a container that will allow excess water to drain from the bottom. Drainage is an essential part of caring for these plants and pots lacking in drainage holes will not work.

Keep in mind that pots made out of terracotta will absorb some of the water from the soil. This can be good if you accidentally overwater your cactus, but it also means you’ll need to water more frequently during hot, dry weather.

Glazed ceramic or plastic pots are not able to absorb water, so they may need to be watered less frequently than cacti planted in terracotta pots.

The specific type of pot you choose is a personal choice, but it’s important to keep these factors in mind when making your decision.

If you’re looking for an easy way to add more Trichocereus grandiflorus to your collection, you may want to try propagating your existing plants. Propagating this species is incredibly easy, even if you have little experience doing so.

When propagating cacti, it’s important to use safe handling precautions to avoid being injured by the sharp spines. Wearing gloves or wrapping the cactus in newspaper, towels, or pieces of carpet is recommended. If you’re handling smaller cacti, such as offsets, you may also be able to use tools such as chopsticks to safely move the plant to its new pot.

Offsets, also known as pups, are the tiny cacti produced around the base of your Red Torch Cactus. Offset removal is the easiest way to propagate your cacti as nature has done the majority of the work already.

Brush away a bit of the soil to see the roots of your offsets and gently separate them from the mother plant using your fingers or a sharp knife. Don’t forget to protect your hands during this process.

Once the offsets have been removed, you’ll need to let them air dry for a few days to let their wounds callous. This helps prevent infection by fungus or bacteria once they are replanted into the new soil.

After the offsets have calloused, you can move them to their own containers and plant them in cactus-approved soil. Once they’re safely planted in their new homes, it’s recommended to give them a few days to settle in before watering them.

Cuttings are an easy way to propagate your Red Torch Cactus, while also keeping your mother plant’s size in check. If your cactus has produced many branches and you’d prefer to trim it back, don’t let those branches go to waste!

To take stem or branch cuttings, be sure to use only sharp and sterile scissors or shears to make sure it’s a clean cut. Again, once you’ve collected your cuttings, you’ll need to let them callous for a few days prior to planting.

See also
Why is my Succulent Dormant?: How to Care for Surviving Succulents

Before planting, you have the option of dipping your Red Torch cuttings in a rooting aid such as rooting hormone powder. Though this isn’t required for success, it can help your cuttings produce roots more quickly.

When you’re ready to plant your cuttings, place them cut side down into a well-draining soil mix. You can water the cuttings sparingly for the first few weeks but be aware that they cannot absorb moisture well without roots.

After a few weeks, you should begin to see tiny roots developing near the cuttings’ cut ends. Once the roots start appearing, you can start to return to a normal watering schedule. Within a few months, your cuttings should have established root systems and you can treat them normally.

Growing Trichocereus grandiflorus from seeds is possible, but it’s recommended only for the most patient gardeners. Growing cacti from seeds can take quite a while, which is why most people choose to propagate with offsets or cuttings.

If you’re committed to growing cacti from seeds, you can either collect seeds from your existing Red Torch Cacti after they’ve bloomed and been pollinated or purchase the seeds online.

There are plenty of vendors online that specialize in the seeds of cacti and succulents. Since this species isn’t particularly rare, you should be able to find seeds relatively easily.

Once you have the seeds, you’re ready to plant them in a seed tray or shallow pot. Sprinkle the seeds across the top of the soil and sprinkle a bit of soil over the top without burying them.

You’ll need to keep the soil moist, but not wet enough to cause the seeds to rot. Misting is usually recommended overwatering as it won’t disturb the soil’s surface as much.

It can also be helpful to cover the soil with a sheet of plastic or glass to help retain moisture.

With any luck, you should begin to see tiny Red Torch seedlings sprouting from the soil’s surface. It can take several weeks for the seeds to germinate, so it’s important to be patient.

Allow the seedlings to grow to a sturdy size before attempting to transplant them. If you move them too early, you risk accidentally damaging them.