Can't Get Rid Of Succulent Pests?

Banana Succulent or String of Bananas, also known as Curio radicans or Senecio radicans, is a popular trailing succulent with banana-shaped leaves. It’s a low maintenance plant that is perfect for beginner and experienced gardeners alike.

Though commonly called String of Bananas, this unique succulent goes by a few other names as well. It’s also known as Banana Succulent, Banana Vine, Fishhook Senecio, String of Fishhooks, and Creeping Berry.

The string of Bananas is native to South Africa, where it grows in the Cape Province area. Surprisingly, this plant is edible and is commonly eaten by the Khoi-khoin people of South Africa.

The most striking feature of this trailing succulent is the banana or fishhook shaped leaves, which are lime green in color. Its stems can grow to over three feet in length and are just as at home creeping along the ground as they are trailing from a hanging container.

Each banana-shaped leaf measures just over an inch in length and has a small translucent crescent that acts as a window into the leaf. This allows more sunlight into the leaf to allow for optimal photosynthesis.

In late fall or early winter, String of Bananas produces showy white blooms. The petite flowers grow in pompom-shaped clusters and are reputed to smell like cinnamon.

String of Bananas is frequently grown in hanging containers as it shows off the long stems and seasonal blooms. However, this plant also makes great ground cover when grown in an appropriate climate.

Each stem grows roots along its length, which allows the plant to grow securely along with the rocky, sandy soil of its native homeland.

Caring for String of Bananas

String of Bananas is definitely one of the easiest trailing succulents to grow, no matter how much gardening experience you may have. As long as they are planted in the right soil and provided with the appropriate amount of sunlight and water, these plants are relatively fast growers.

String of Bananas grows best indoors with bright, indirect light. If planted outdoors in the right climate, they will do well with partial shade.

This slow transition to an increased light level will help the plant adapt and reduce the risk of sunburn. Remember, sunburn damage cannot be repaired, so if your String of Bananas does get sunburned, you’ll either need to accept your plant’s new appearance or cut away the damaged leaves and stems.

String of Bananas is also a great choice for indoor succulent collections, especially if grown in an east or west-facing window. They can also be grown in low-light environments but may become leggy if kept in inadequate light for prolonged periods of time.

These succulents do well with indoor grow lights, so if your space doesn’t allow your String of Bananas to get its preferred amount of light, you can easily supplement with an artificial light source.

As with most succulents, String of Bananas are drought tolerant and are frequently killed by overwatering. They need more frequent watering during their growing season, but overly wet soil should be avoided.

Most gardeners recommend watering deeply but infrequently. It’s best to allow the soil to dry out between watering to prevent the plant from having to grow in standing water.

Signs of overwatering are typical of most succulents. The leaves toward the base of the stem will be the first to be affected and they will turn yellow and eventually drop off.

Excess soil moisture should be avoided at all costs as it puts the plant at risk of developing root rot. If early signs of overwatering are ignored, root rot will eventually set in.

Once the roots have begun to rot, String of Banana’s chances of survival are slim. The only chance you have at saving your plant is to cut away the damaged areas, which means beheading might be your only option.

When using a pebble tray, it’s important to keep your container elevated above the water level to prevent the soil from soaking up the water in the tray. This absorption could contribute to accidental overwatering.

String of Bananas prefer warm temperatures and are quite tolerant of high heat, so long as direct sunlight is avoided during extreme temperatures.

This is not a frost tolerant plant, so freezing temperatures should be avoided. This is a plant that adapts well to growing outdoors during the summer and being brought inside during winter.

Whether you grow String of Bananas strictly indoors or move it outdoors during warmer weather, you should be prepared to bring it inside when temperatures drop close to 30 degrees Fahrenheit.

String of Bananas has similar soil needs to many other types of succulent. As long as the soil is well-draining and doesn’t retain much moisture, this plant will be happy.

Commercial soil mixtures formulated for use with cacti or succulents are ideal for String of Bananas. Remember, large particles such as sand, gravel, perlite, or even bark are ideal for promoting proper drainage and airflow.

Avoid using soil mixes with large percentages of water-absorbing matter such as clay or peat moss. These materials will create the perfect environment for root rot, so it’s best to either buy commercial cactus soil or create your own mixture.

Though commonly recommended as a way to increase drainage, lining the bottom of your pot with rocks should be discouraged. It doesn’t actually help drainage and in fact raises the water table, which can put your plants at risk of developing root rot.

Once you’ve purchased or made the perfect soil for your String of Bananas, you need to further encourage proper drainage by using only containers with drainage holes. After all, there’s not much point to using well-draining soil if that excess water doesn’t have anywhere to go.

Though it may be possible to grow your succulents in containers without drainage holes, you’re putting your plants at risk should you accidentally give them too much water.

If your container of choice doesn’t have drainage holes, you can always drill your own holes. It’s easy to do provided you have access to a power drill and masonry bit.

Most gardeners choose to plant their String of Bananas in hanging containers as this accentuates their long, draping stems. This is a great way to maximize your space and make use of otherwise unused vertical space.

However, String of Bananas also makes excellent ground cover when planted in the ground outdoors. You should, of course, be certain that you live in the right climate, so your plants don’t freeze when winter arrives. 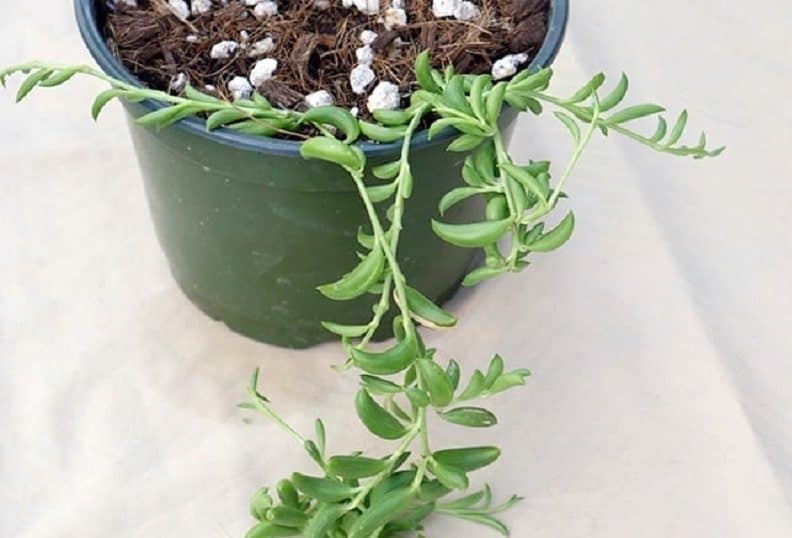 String of Bananas is an incredibly easy succulent to propagate. There are three methods of propagation: offset division, stem cuttings, and seeds. The most common method of propagation is with cuttings, but the other methods are definitely worth experimenting with.

Offset division is as simple as separating the offsets, or pups, from the mother plant. This process is best done using a sterile, sharp knife to cut them away.

A pair of scissors or shears may also be used, but knives are best as they require less space to maneuver and there’s less of a chance that you’ll accidentally damage the mother plant.

When cutting away offsets, it’s recommended to cut them as close to the mother plant as possible to maximize the number of roots included with your pup.

After cutting, it’s best to allow the offsets a chance to heal their wounds. A few days in the open air will be enough to allow the cuts to callous, which will protect them from potential infection once planted in their new containers.

Once the offsets have calloused, they can be transplanted and cared for as you would a mature String of Bananas.

Cuttings are the most popular method of propagation because of the lack of effort involved. There is no skill or talent necessary to successfully propagate String of Bananas with cuttings, so it’s a great method for even inexperienced succulent gardeners to create new plants for themselves or friends and family.

After you’ve taken your cuttings, you’ll need to wait a few days before placing them in their new container. This allows the cut you’ve made to callous over, which will help prevent any fungus or bacteria from infecting the wound.

Once calloused, the cutting is ready for its new pot. Place the cuttings into a new container with well-draining soil. You don’t necessarily need to water them at first as they don’t have any roots to absorb it with anyway.

For the more adventurous gardener, you may also want to consider propagating your cuttings in water. Some gardeners find more success with this method, while others prefer the traditional method using soil.

If you’ve taken several cuttings, putting them all in one pot can create a fuller-looking plant more quickly than if you had only planted a single cutting or two together. After the cuttings have begun to root, you can treat them just as you would a mature String of Bananas.

Propagating String of Bananas from seed is a project for patient gardeners. Though they are a faster-growing succulent, you’re not going to have a huge, trailing plant for some time if you use this method.

However, it is a fun project that is as easy as growing any other plant from seed. Some gardeners recommend soaking the seeds in water for up to 24 hours before sowing to help encourage germination.

Sow the seeds just before the growing season in well-draining soil. Keep the seeds relatively warm and moist until they begin to sprout.

You likely won’t be able to transplant the seedlings right away as they may be too delicate to survive the change, but once big enough, you can move them to their own pot and treat them as you would any other String of Bananas.

One of the most common reasons people struggles to keep their String of Bananas alive is overwatering. Overwatering can quickly lead to root rot, which is nearly impossible to save your plant from unless you behead it before the infection moves up the stem.

Be sure to let the soil dry out before watering to ensure that your String of Bananas isn’t getting more moisture than necessary.

Unfortunately, String of Bananas is as prone to pest infections as any other succulent. Common pests include fungus gnats, spider mites, scale, and mealybugs. Most of these pests won’t cause serious harm to your plants as long you can the infestation in its early stages.

Most pests have a short life cycle, which means they can reproduce quickly, and their population can explode in a matter of weeks. With a huge population, it can take weeks or even months to treat the infestation.

Rather than put yourself through the frustration of having to rid your entire garden of pests, be sure to quarantine any new plant you bring into your home. Keep them separated from your main plants for at least two weeks to ensure that they haven’t introduced any creepy crawlies into your household.

Don't Know How To Get Rid Of Fungus Gnats?

with our FREE GUIDE!