Echeveria purpusorum is a petite rosette-shaped succulent. They are native to Oaxaca and Puebla, Mexico. This is not a common species of Echeveria, but it is loved by collectors due to its almost reptilian appearance.

This unique Echeveria is a great choice for gardeners looking to add a little spice to their living walls, wreaths, and fairy gardens. It is a slow-growing but versatile plant that can also be grown on its own indoor or outside if the climate allows.

Echeveria purpusorum is quite small, reaching only about three inches in diameter at maturity. The leaves are triangular in shape with sharp edges and pointed tips. Each leaf measures about one inch wide and just over 1.5 inches in length.

The leaves come in varying shades of green, from light green to a deep olive shade. The leaves are mottled with small reddish-brown spots, which deepen in color when stressed.

When in bloom, Echeveria purpusorum produces bright red flowers with yellow tips. It typically blooms in late spring. The flowers grow atop a central stem that can measure up to 12 inches in height.

The hybrids of Echeveria purpusorum tend to be more commonly found at nurseries across the country than the original plant itself.

Echeveria ‘Dionysos’, sometimes referred to as Echeveria ‘Bacchus’ is a popular cross between Echeveria purpusorum and an unknown species of Echeveria. It was named by botanist Jean-Michel Moullec.

It’s been suggested that the majority of plants labeled as E. purpusorum are actually Echeveria ‘Dionysos’. The latter has more plump leaves and the apex of the leaf isn’t quite as pointy.

Echeveria ‘Fabiola’ is a hybrid that was created by combining Echeveria purpusorum with Echeveria derenbergii. It’s similar in size to its parent plants but has pale green leaves with red tips.

Echeveria ‘Shamrock’ is a cross between E. purpusorum and an unknown species of Echeveria. It’s a vibrantly colored succulent with green leaves and bright red leaf edges. The undersides of the leaves are heavily mottled in the same dazzling shade of red.

Echeveria ‘Ben Badis’, also known as Echeveria ‘Kernii’, is a hybrid created by C.H. Uhl by crossed E. purpusorum with Echeveria derenbergii. It looks a bit like Echeveria ‘Fabiola’, but with a bit of red mottling on the undersides of the leaves.

Echeveria ‘Belle Etoile’ is another hybrid between E. purpusorum and an unknown species of Echeveria. The leaves tend to be long and slender in shape and green with red mottling.

One of the rarest hybrids of E. purpusorum is x Graptoveria ‘Amethorum’. This hybrid was created by crossing E. purpusorum with Graptopetalum amethystinum. It has plump, gray-green leaves with red leaf margins.

As with most species of Echeveria, E. purpusorum is not a difficult plant to care for. It is a slow-growing succulent, so don’t expect much growth even if you’re providing ideal conditions. Careful watering habits and good plant hygiene will help ensure your plant stays happy and healthy.

Echeveria purpusorum thrives in bright light, so if you’re keeping your succulent indoors, be sure to place it in a south-facing window if possible. East or west-facing windows may also be able to provide enough light. 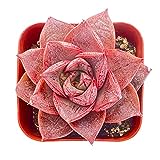 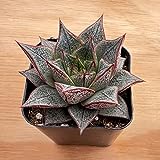 This is not an ideal plant for environments with little light. If your indoor space can’t provide enough light for your E. purpusorum, you may want to consider purchasing a grow light. A full spectrum grows light will ensure your plant is getting enough light regardless of where you place it in your home or office.

See also
Is My Succulent Over or Under Watered: Knowing the Difference

It is possible to grow Echeveria purpusorum outdoors in the right climate. Partial sun or partial shade is best, but the full sun may be appropriate in some areas. Climates that get extremely hot may not be appropriate for E. purpusorum to be in full sun and the plant may get sunburned.

It’s also a popular choice to plant this succulent in a container that can be taken outside during warm weather and moved indoors when temperatures drop. If this is the case, the plant can be moved around to suitable light.

Whenever you move a succulent outdoors, it’s important to allow the plant time to acclimate to more light over a period of several weeks. By increasing the light incrementally every couple of days, you decrease the chances of your Echeveria getting sunburned.

Remember, sunburn damage cannot be repaired so you’ll either need to trim away the burnt areas of the plant or accept your plant’s new appearance until new growth replaces the damage. Long periods of time in an area with too much light can also result in a dead plant.

As with all succulents, it’s important to make sure your Echeveria purpusorum is getting enough water, but not so much that the soil is consistently moist. These plants like to be watered deeply, but only after the soil has dried out.

Succulents that are in need of water will appear wrinkled or shriveled. The normally plump leaves may also appear much thinner than they are when the plant is hydrated.

Too much moisture will result in root rot, so it’s crucial to check to the soil before you water and monitor for signs of overwatering. Succulents that have been overwatered may have yellowing or mushy leaves near the base, which may eventually fall off.

Consistent overwatering will likely result in root rot, which will not be obvious until it’s too late to save the plant. Rotten roots will be black with a distinct odor of decay. If left untreated, the rot will move up the plant’s stem. Once the rot moves up the stem, you’re more likely to notice it, but your plant will be beyond help.

The key to finding the right watering schedule is to check the soil a few inches below the surface with either a soil moisture meter or your finger. If the soil is moist, test again in a few days. If the soil is dry, it’s safe to water.

Echeveria purpusorum is not a cold-tolerant plant, so if you live in a climate that frequently reaches freezing temperatures in the winter, you’ll need to bring your succulent indoors.

When grown indoors, it’s unlikely that temperatures will dip low enough to put E. purpusorum at risk. However, the plant should still be protected from cold drafts.

This plant is fairly tolerant of heat, just as long as it’s protected from direct sun during the hottest part of the day. If you live in a particularly hot climate, the partial shade will keep your E. purpusorum happy.

Echeveria purpusorum has the same taste in the soil as most succulents. Well-draining soil made of coarse sand, perlite, pumice, gravel, or bark is ideal. You should avoid large amounts of water-retaining ingredients like peat moss or clay.

If you’d prefer not to DIY your succulent soil, a commercial soil mix made for cactus and succulents is ideal. These types of soils typically have large particles that will promote proper drainage and allow for airflow around the roots.

Though it’s a common remedy for drainage, lining the bottom of your pot with rocks should be avoided. It doesn’t actually increase drainage because it causes what’s called a perched water table, which will place the water table closer to your plant’s roots.

In order to prevent root rot, you’ll also need to make sure that your pot allows the excess water to escape from the soil. If your pot doesn’t already have one, it’s easy to drill a drainage hole if necessary.

When planting outdoors, it’s recommended to grow succulents in raised garden beds or berms to aid in drainage. Whether your succulent is planted in the ground or in a pot, well-draining soil is still required.

Echeveria has a reputation as being one of the easiest succulents to propagate due to their ease of care. They can be easily propagated with seeds, cuttings, or offsets. So, you have plenty of options to create new plants to expand your garden or give to loved ones.

When it comes to slow-growing succulents like E. purpusorum, seeds are not the ideal propagation method for impatient gardeners. However, if you’ve never used this method of propagation before, it can be fun to experiment with.

Seeds are readily available for purchase on the internet, or you can try collecting seeds from your own plants after they bloom. If you’re feeling really ambitious, you can also try creating your own hybrid by cross-pollinating your E. purpursorum with another compatible succulent.

Once you have your seeds in hand, simply sow them in moist soil and cover them with a humidity dome or layer of plastic wrap to keep them moist. You’ll need to keep the soil moist, but not overly wet to encourage germination. Too much moisture may cause the seeds to rot.

Once the seedlings appear above the surface of the soil, you can remove the dome or plastic wrap to help get rid of excess moisture. For the first few weeks, the seedlings need the soil to be kept a bit moister than you would with a mature plant.

After the seedlings seem like they’ve established themselves, you can allow the soil to dry out between watering. At this point, the seedlings can be treated as you would a mature Echeveria.

Echeveria purpusorum can be propagated by using a leaf or stem cuttings. Leaf cuttings take a bit more time to mature than stem cuttings, but with the right techniques, both can be successful.

When taking cuttings, it’s crucial to use sharp, sterile tools. A knife or pair of shears or scissors will work well. Sharp, sterile tools are recommended to minimize damage to your plants and prevent infection by fungus or bacteria.

After you’ve collected your Echeveria cuttings, it’s recommended to allow the cuttings to rest for a few days to allow the cuts to callous before planting. This helps prevent the wounds from being infected once they’re introduced to the soil.

If you’re feeling brave, you can also try water propagation. Rather than putting your cuttings in the soil right away, they’re grown in water until they have adequate roots to be transplanted. Some gardeners swear by this propagation method while others prefer the traditional use of soil.

Offset division is another common method of Echeveria purpusorum propagation. When kept under ideal conditions, Echeveria will produce pups, or offsets, around their base. These tiny plants are easily removed using your fingers or a sharp knife or pair of shears.

The point of separation should be as close to the mother plant as possible to preserve as much of the pup’s roots as possible. Offsets are especially easy to care for because you can begin treating them as mature plants right away.

As mentioned earlier, overwatering is the most common problem encountered by gardeners with Echeveria purpusorum. If you can perfect your watering techniques, you should experience a few issues.

Echeveria purpusorum are not especially prone to pest problems but can host the most common succulent pests like fungus gnats, scale, mealybugs, and mites. Prevention is always better than treatment, so it’s important to keep a close eye on your plants so you can catch infestations in their early stages.

The earlier you can catch the problem, the easier it will be able to treat. Most pests have short life cycles, so their populations can explode within a matter of weeks. Treatment can take several weeks or even months depending on the severity of the problem.

To prevent pests from taking over your garden, it’s important to quarantine all new plants for at least two weeks before introducing them to your current collection. That way, you only have to treat a few plants, rather than your entire home or garden. 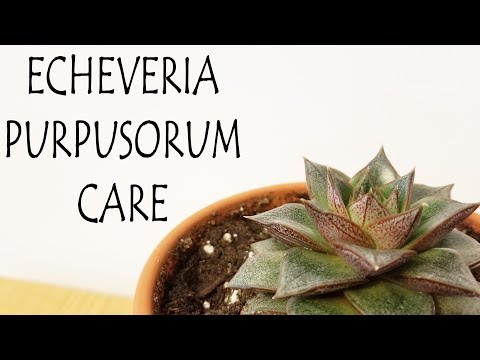