How Tequila is Made

Agave tequilana may be the only succulent that can claim to be behind one of Mexico’s top exports. Each year, over 300 million plants are harvested to be used to produce tequila. Under federal regulations, farmers must raise a specific cultivar of Agave tequilana known as Weber Blue to produce one of the world’s favorite distilled beverages.

Although Agaves are most well-known for their use in the production of tequila, they are actually used to make many types of distilled spirits such as mezcal, bacanora, pulque, raicilla, and sotol. However, unlike other types of spirits, tequila can only be made from one type of Agave: Agave tequilana or Blue Agave.

Much like champagne, tequila can only be called tequila if it produced in certain areas of Mexico. Although a few other states are allowed to produce tequila, the majority of tequila is produced in the state of Jalisco. While some of the bigger names in the industry have their distilleries near the town of Tequila, northwest of the city of Guadalajara, a few boutique brands choose to grow their Agave in the highlands of Jalisco. The red clay soil of the area is said to impart a unique flavor into the final product.

Read Article: The Difference Between Agave and Yucca

Growing and Harvesting the Agave

The thick, fibrous leaves of the Agave can only be cut using a sharp coa and plenty of physical strength.

Growing Agave tequilana for the purpose of producing tequila is not a short process. The plants are cared for in vast fields for about six to ten years before they are ready to harvest. When Agaves are ready to bloom, they produce a long stalk from the center of their rosette. In tequila production, this stalk is removed as soon as it begins to grow so that the plant can focus its energy elsewhere. Plants that have had their stalks removed typically have higher concentrations of sugar, which is essential in fermentation.

The harvester, or jimador, used a sharpened, curved tool called a coa to slice off the Agave’s tough leaves. The heart of the plant, called the piña, is the only part of the Agave that is used to make tequila. Jimadors must be careful while handling the piñas, as the caustic sap of the Agave can cause rashes that can last for up to a week.

At the time of harvesting, the piña of an Agave plant will weigh anywhere between 80 and 200 lbs. This may seem like a lot of weight but remember that Agaves are succulents that retain moisture. It takes approximately 15 pounds of Agave piñas to make a single liter of tequila, so large distilleries need a lot of Agave to keep up with demand. After harvesting, the piñas are sent to the distillery to be cooked. 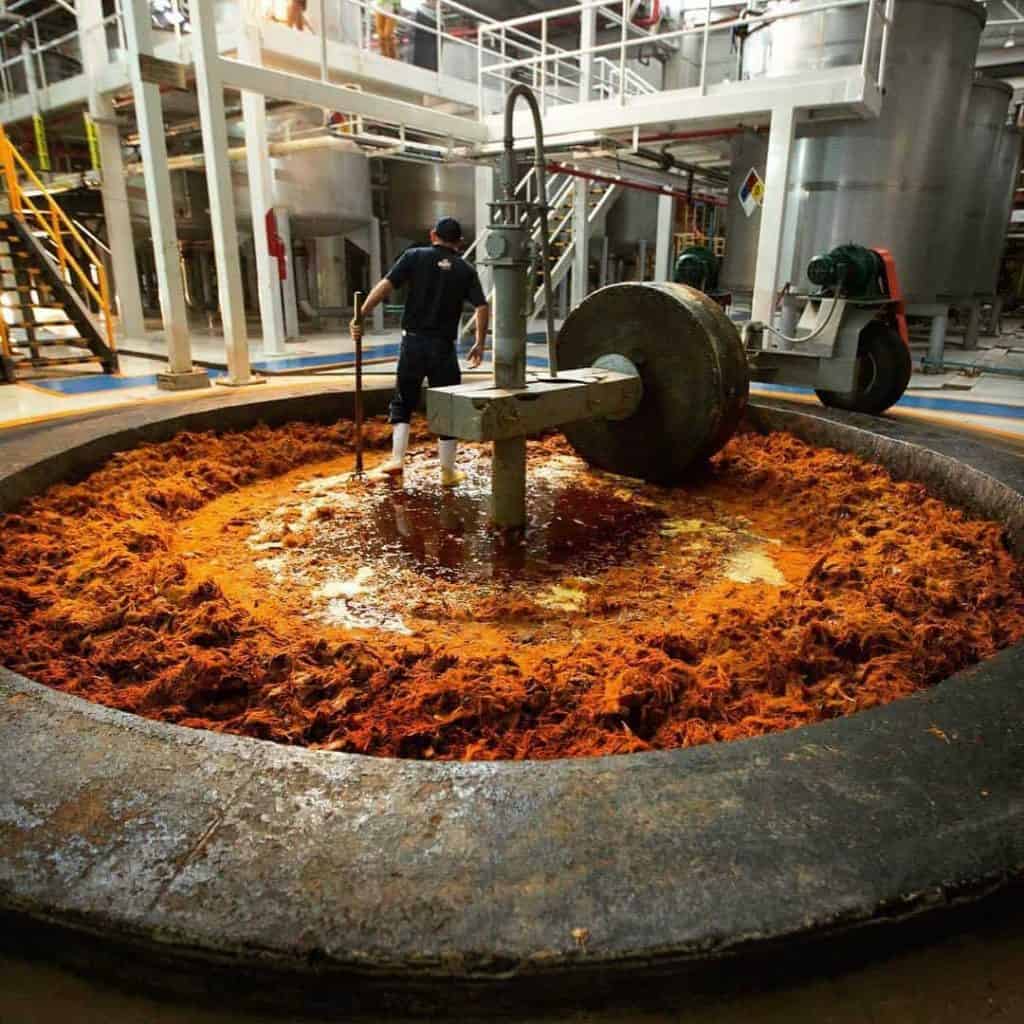 After steaming, the piñas are placed into a tahona to be crushed and ground.

Heating the Agave is an essential part of the tequila production process. Not only does it soften the tough and fibrous piña, it converts the carbohydrates contained in the plant to simple sugars, which can be fermented. Traditionally, tequila makers cooked the Agave in brick ovens, and while some producers still use this method, the majority of modern-day distilleries use steel autoclaves to steam the Agave hearts. The piñas are usually cooked for about two or three days before moving on to the tahona.

After steaming, the Agave hearts must be crushed or ground to extract every last drop of the sugary liquid called aguamiel. In the past, tequila producers used tahonas, or stone wheels, to crush the piñas. The wheels were usually powered by horses, mules, or oxen, but nowadays livestock have been replaced by tractors. Many distilleries no longer use stone wheels, often preferring to use the same mechanical crushers used for sugar cane. After going through the tahona, the aguamiel must be fermented.

After steaming and crushing, the Agave liquid is combined with yeast and fermented in large vats.

For proper fermentation, the aguamiel must be combined with an exact ratio of water and yeast. As with most products containing yeast, producers are particular about the type of yeast they use. Some use a type of yeast that occurs naturally on Agave leaves, while others use wild strains, or strains that have been passed down through generations.

The yeast, water, and Agave juice are usually fermented in either wooden vats or large stainless-steel tanks. Like many other aspects of tequila production, each distillery typically does things a little differently. Fermentation occurs over a period of between seven and twelve days. During this time, many distilleries believe that happy yeast makes for better tequila. They try to create a positive environment for the yeast by playing relaxing, happy music.

Distillation works to purify the Agave liquid through rapid heating and cooling.

The next step in the process is the same as with many other types of spirits. Depending on the producer, tequila is distilled either two or three times. The first distillation produces a liquid of around 20% alcohol. This cloudy, pungent liquid is called ordinario. Ordinario is not yet tequila as the first distillation is simply meant to remove solid particles such as the yeast and other proteins or minerals.

After the second distillation, the alcohol content has increased to somewhere around 40-55%. If the liquid is clear, it can be considered silver or blanco tequila and can be sold as such. However, if the liquid is still cloudy, it still contains solid particles and will need to be distilled for a third time. Most tequilas are only distilled twice, since nearly all particles are removed after the second distillation, but some producers choose to distill their product three times to be sure.

Some distilleries use new barrels, but most are byproducts from the bourbon and whiskey industries.

Unaged blanco tequila is clear, but the longer a tequila is aged, the more color it develops. As with spirits such as bourbon and whiskey, the liquid gets its color and flavor from the barrel. The tequila absorbs tannins from the wood, giving it a rich, amber color.

So, the next time you enjoy a refreshing margarita or a classic shot of tequila with salt and lime, remember that the complex flavor of your favorite drink is due to a simple succulent. You can even propose a toast to Agave tequilana!

Tarah Schwartz is a freelance writer living in Scottsdale, Arizona. Her life in the desert has inspired a passion for succulents and cacti.

Table of Contents 1. Drainage is important!2. Get the Right[...]