To the untrained eye, there are many similarities between Agave and Yucca. Both are drought-loving desert plants that grow their leaves in a rosette pattern. They are often similar in color and their leaves protrude from a center stem. Both plants prefer warm, dry climates and are native to Mexico and the southwestern United States (similar to Mammillaria Elongata). Agave and Yucca even belong to the same subfamily, Agavoideae.

Agave and Yucca are also similar in their uses. Outside of decorative purposes, they share the quality of stiff, fibrous leaves. The fibers of the leaves are often extracted to be used to make rope, rugs, nets, and other home goods. The durability of the fibers and sustainability of their sources make them popular material choices for eco-friendly households.

With just a casual glance, it can be easy to confuse the two plants, but a closer inspection will reveal subtle differences. Keeping these differences in mind, you’ll soon be able to expertly identify whether a plant is an Agave or a Yucca.

Related Article: How Tequila is Made

The Leaves of Agave and Yucca

Both Yucca and Agave grow their long, pointed leaves in a rosette pattern, similar to many other types of succulents. This can cause some confusion, especially considering the plants also share similarities in the locations and conditions in which they grow.

One of the most noticeable differences between Agave and Yucca is the shape of the leaves. Although Agave tend to have less fleshy leaves than other succulents, the leaves the Yucca are even less plump. Yucca leaves also tend to be quite long and narrow, compared to Agave leaves. Yucca leaves are often compared in shape to swords. 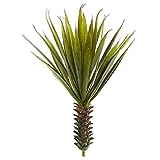 Agaves, Yuccas, and Their Kin: Seven Genera of the Southwest (Grover E. Murray Studies in the American Southwest)
Check Price on Amazon

Agave leaves also stand out from Yucca leaves because of the spikes that run along the edge of the leaves. These spikes, also known as margin teeth, line the edges of the leaves and end in a pointed terminal spine at the tip of the leaf. Yucca leaves can also have spines and marginal teeth, but they are always much smaller relative to an Agave.

The color of the leaves in both Agave and Yucca will vary according the variety. Agave can range in color from the ghostly blue-green of Agave tequilana to the vibrant yellow and green Agave desmettiana ‘Variegata’. Yucca also come in a variety of colors, including the deep green Yucca gloriosa and the canary yellow Yucca filamentosa ‘Color Guard’.

Flowering Habits of Agave and Yucca

One of the key differences between Yucca and Agave is the frequency in which they bloom. Yucca are known to bloom reliably once per year, usually between mid-summer and early fall. Different varieties will vary slightly in the exact timing of their bloom.

When Yucca plants bloom, they produce a long stalk from their center, which can reach about six feet in length. The top of the stalk is covered in waxy, white flowers hanging downward in clusters. The flowers tend to be more rounded than those of the Agave, almost resembling the shape of a bell. After blooming, the stalk will dry up and turn brown. Most gardeners choose to remove the unsightly stalk after it’s finished blooming.

Agave, on the other hand, bloom only once in their lifetime. Depending on the species and the conditions the plant is growing in, Agave will bloom somewhere between 10 and 30 years of age. After an Agave blooms, it dies shortly after. The Agave’s blooming habits have given it the nickname ‘Century Plant’ because of how infrequently it produces flowers.

Agave also produce a stalk from the center of the rosette, but the Agave’s stalk can reach up to 30 feet in height. At the top of the stalk are clusters of the plant’s yellow or red flowers. The blooms are usually small and tubular in shape.

Read Article: The Difference Between Echeveria and Graptoveria

Size and Shape of Agave and Yucca

The size of an Agave plant not only sets it apart from Aloe, but from Yucca as well. Of course, there is some size variance between the various species, but Agave plants can grow to be quite large. Some Yucca can also grow to a considerable size, but they tend to grow in a different manner than Agave.

As Agave plants grow, they increase in size both in height as well as in diameter. A small Agave will be similar in shape to a larger Agave, the only difference being in the overall size of the plant. Agave are stemless plants that grow closely to the ground at their base. The largest Agave varieties can reach up to about eight feet in height and nine feet in diameter.

See also
The Difference Between Aloe and Haworthia

Yucca, on the other hand, tends to grow more in height than in diameter. As the plant increases in height, it will continue to produce leaves of approximately the same length. Over time, a Yucca will produce a stem similar to the trunk of a small tree. In fact, the Joshua Tree is a species of Yucca plant. Although it’s not actually a tree, the Joshua Tree is the largest Yucca, reaching up to 40 feet in height.

Caring for Agave and Yucca

Fortunately, regardless of whether you can correctly distinguish an Agave from a Yucca, you can adequately care for both provided that you give them well-draining soil, plenty of sunshine, and infrequent watering.

Both plants thrive in dry, arid climates, so if you live in their natural habitat, you may be able to grow them outdoors. However, if you live in a wet or cold climate, you may need to bring them indoors from time to time. Neither plant does particularly well with cold or moisture, so they must be protected from freezing temperatures and standing water.

Being able to distinguish one type of plant from another is a sign of an experienced gardener. So, now that you can correctly distinguish an Agave from a Yucca and an Aloe, as well as an Aloe from a Haworthia, you can share this information with your friends and play an exciting game of Plant Trivia!

« How to Grow Colorful Succulents
10 Interesting Facts About Succulents »