Now that you know the differences between a Haworthia and an Aloe, can you tell the difference between an Agave and an Aloe? It can be easy to confuse Agave with Aloe, especially at first glance. They are similar in shape and often similar in size. They also have similar preferences in the type of climate, frequency of watering, and love of well-draining soil.

There are quite a few differences between Agave and Aloe that you can look out for. The shape and texture of the leaves, growing season, and flowering habits of each plant are very different. They also originate from different continents. Pay attention to the details and you’ll easily be able to tell if a plant is an Aloe or if it’s an Agave.

Similarities Between Aloe and Agave

At first glance, Aloe and Agave can appear very similar. Both plants have long, spiny leaves originating from a central stem. They grow close to the ground and are often similar in color. Despite their similarities, you may be surprised to learn that the two plants are not closely related.

If you'd like to add an adorable Aloe like this to your garden, check out Leaf and Clay!

5 Differences Between Aloe and Agave

One of the most noticeable differences between Aloe and Agave is their size. Agave tend to be significantly larger than Aloe at maturity. This is especially apparent when in bloom - some Agave can produce a flower stalk up to 40 feet tall. There are certain types of Aloe that can grow to be quite large, such as the Tree Aloe, but in general, Agave tend to be much larger than most varieties of Aloe.

Aloe typically have thicker, more fleshy leaves than Agave. Their leaves may feel softer and almost spongy in texture. You can almost feel the gel contained within the leaves. 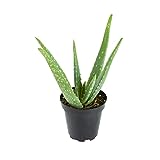 By contrast, the leaves of an Agave plant are generally thinner and more fibrous. An Agave leaf won’t give under the pressure of your fingers the same way an Aloe would. In fact, Agave are so fibrous that the fibers of some varieties are used to make outdoor rugs.

See also
Make a Fairy Garden with Succulents and Cacti

If you still have doubts about whether a plant is an Aloe or an Agave, try to break off a piece of the leaf. If it’s an Aloe, the leaf will break off easily and you’ll be able to see and feel the gel inside. The leaves of an Agave will be tougher to break, requiring the use of shears to remove part of all of the leaf.

Another key difference in the leaves is the spines that run along the leaf margins. On an Aloe plant, the spines will be noticeable, but they will have a softer appearance. You can likely run your finger down the edge of the leaf without significant discomfort. The spines may poke you a bit, but they won’t hurt you. The spines of an Agave will be sharper and may even cut you, so be sure to touch the leaf gently.

Aloe and Agave share similarities in the appearance of their flowers, but the frequency and effects of blooming differ greatly. Both succulents produce flowers on long stalks produced from the center of the plant. The exact length of this stalk will vary depending on the variety, but at the end of the stalk you’ll find red, orange, or yellow flowers.

If you see a plant in bloom, there’s a much higher chance that you’re looking at an Aloe. Aloe plants are polycarpic, meaning they are able to bloom repeatedly. They typically produce tubular or bell-shaped flowers once a year, sometime between December and May.

Agave, on the other hands, are monocarpic plants. This means that they bloom only once in their lifetimes, typically somewhere between 10 and 30 years of age. You’re much more likely to see an Aloe in bloom than an Agave, simply because of how infrequently they produce flowers. Once an Agave has been pollinated and produced seed, the plant begins to die. The plant has completed its life cycle and will not recover once it has gone to seed.

Just for the record - if you see your Agave beginning to send up a flower stalk, you can prevent flowering (and save its life!) by cutting the stem. If you do it early enough, the plant will just "forget about it" and go back to growing!

Agave and Aloe also differ in their preferred growing seasons. Like many succulents, Agave grow during the warmer months and go dormant during the winter. If you have Agave in your garden or in containers, you may need to completely stop watering the plant during its dormant period to prevent root rot. Keeping the plant dry during this time is essential to its well-being.

Aloe, however, have a different schedule. They prefer to grow during the cooler months. After its growing period, the plant will bloom, usually in late winter or early spring. This means that the plant will need to be watered occasionally throughout the wintertime. As always, care should be taken to prevent overwatering.

Unless you’re picking up your plant from its home country, this is not an easy way to differentiate Aloe from Agave, but it’s still important information. Knowing where your plant comes from and the type of climate it prefers will help you care for your plant to the best of your abilities.

Aloe plants are native to Africa, specifically southern Africa and the island of Madagascar.

Agave plants are native to the southern United States, Mexico, and Central America. Both plants are  capable of surviving around the world, provided they are given the appropriate care. They have similar needs as far as soil and frequency of watering, but their differences in growing seasons and flowering habits is likely due to the fact that they originated in different hemispheres.

Although both Aloe and Agave are drought-tolerant succulents that are similar in shape and general appearance, it’s important to know what makes them different. Their differences mean that they require slightly different care, so knowing what plant you have will help you take good care of it.

Related read: How to Care for Aloe Vera

You should definitely know the difference if you intend to use Aloe gel for any medicinal purposes, as Agave can be toxic if you try to consume it in the same way as Aloe. However, if you intend to make your own tequila, Agave is the plant for you.

Now that you can tell an Agave from an Aloe, head to your local nursery, cover the labels, and see if you can correctly identify the plants. Just watch out for hybrid plants, they may really test your succulent knowledge!