Dormancy is a word that’s thrown around every winter. In this article, we’ll dissect the subject of dormancy from the perspective of succulents. All the information comes from peer-reviewed, published manuscripts. Sources included at the bottom.

What is Succulent Dormancy?

In one sentence, the phenomenon can be explained as:

Dormancy is a temporary period of slowed growth.

What does dormancy look like for succulents?  The vast majority of succulents come from arid regions (Sempervivum being a notable exception). Typical dormancy behavior in those places is not very striking. The plant might close up a little, but not much else. There aren’t many visual indicators of dormancy in succulents.

When are succulents dormant? Succulent dormancy is almost always during winter/summer.

Do other plants have dormancy periods as well?

Yes, plants other than succulents have dormancy periods. In fact, dormancy is most commonly observed in temperate plants (which most succulents are not).

Every winter trees drop their leaves. Grasses and other herbaceous (which means “not woody”) plants either die off completely or die down to their roots.

Aaaand then they stay that way. Until spring! That’s a process most of us are intimately familiar with – it’s like the sun rising in the east and setting in the west. It’s a given.

See also
How to Grow Succulents and Cacti from Seeds

But that’s a prime example of plant dormancy. Those plants are sitting out winter because it’s more trouble than it’s worth to keep growing during those harsh conditions. A plant would need special adaptations to prevent the cold from freezing all the water in its cells (like pine trees have).

There are three factors that influence dormancy (in all plants).

The obvious example here is when it starts to get cold and leaves begin to brown and fall off (which doesn’t really happen with succulents). However, higher temperatures can also be a signal that it’s time to go dormant.

This applies to xerophilic (arid-loving) plants specifically. They will go dormant during the extra-dry, extra-hot summer of a desert to conserve water.

This just means light levels. How much light does a succulent get every day? A plant can actually track the differences in the amount of daylight over time. They even have a few different methods. 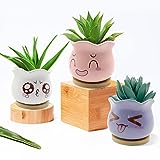 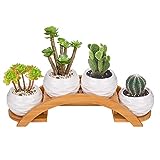 One popular one is some plants produce a chemical only at night that accumulates slowly, but is rapidly consumed when the plant senses light. Depending on how long the night lasts (which is an indirect measurement of how long the day lasts) the chemical reaches a greater concentration.

Once it hits a specific threshold, other processes are triggered. That’s how they can coordinate things like every plant in a species flowering at the same time! Plants literally count how long a night is to figure out what season it is.

This should be fairly intuitive, especially for us succulent growers who are already familiar with the precise requirements of watering your succulents.

In many regions, annual rainfall is concentrated during two or three seasons. The weather tends to follow some broad patterns (or it did before climate change, anyway). Thousands of years of the same has given people and even plants a pretty good idea of what to expect as far as rain is concerned.

Even though succulents are like the camels of the plant world, there’s not much point in trying to eke out a living during the extreme conditions of high summer in a desert (or harsh winters, for that matter). So, instead, they just opt not to.

Of course, plants don’t measure water by annual rainfall. It’s usually either by ambient humidity, which affects the rates of evapotranspiration (water loss through “sweat”) or simply the amount of time since the last good drink.

Can Dormancy be Artificially Induced or Avoided?

Dormancy is simply a reaction to a combination of the above 3 primary factors. Turn down the heat and the light to convince a plant that it’s winter. A species that is winter dormant will slow down and, conversely, winter growers (which are usually dormant during the summer) will take off.

In fact, the simple act of keeping your succulents indoors is mitigating, or possibly negating entirely, the effects of dormancy. The temperature indoors doesn’t drop, not significantly anyway. Changes in watering schedules are optional.

The only thing that really changes is the light level – and that’s assuming the plant is on a windowsill and not under a grow light.

What are the effects of Succulent Dormancy?

So what are these plants actually doing when they’re “dormant”? Slacking off, probably.

Here are a couple of examples of things most plants go through when they’re dormant.

In addition to the physiological effects of dormancy, other behaviors are linked to the onset of dormancy.

A succulent-specific example: many kinds of barrel cactus will only flower after being exposed to colder temperatures and reduced light for a day or two. The beginning of dormancy means it’s time to reproduce, too. Growing those flowers will be one of their last acts for the season.

One thing that's not linked to dormancy is plant coloration. Succulents are highly prized for their bright, vivacious colors. Those colors are the result of sun stress. Even in the reduced light of winter, there should be enough direct light for succulents to maintain those colors. If your plants are fading to plain green, get them some more light!

For some plants, yes, dormancy is an important part of their life cycle. Like in the example above, some plants won’t undergo sexual reproduction (flowering) without it. Some bulb plants, like lilies, will not grow back the next year if the bulb isn’t exposed to cold temperatures for a couple of months.

To go further, some seeds won’t germinate until they have been dormant for a period of time in chilly weather. Many woody plants require cold temperatures to harden their roots, which promotes healthy, robust, and stable root systems.

Most succulents are grown in commercial greenhouses in a perennially warm, sunny place (hello, California) or in a heated, lighted greenhouse elsewhere. Most of our home-grown propagations are in similar conditions. These indoor plants may have never been properly dormant their whole lives.

I posit that most plants, especially succulents or tropicals, will be satisfied to continue a growth cycle indefinitely without dormancy.

Is Dormancy Incremental / On a Spectrum?

A succulent that is dormant might grow a new leaf or some of those aerial roots. That doesn't mean that plant isn't dormant. Dormancy is a period of slowed growth, not the complete cessation of the creation of new cells. An organism would die pretty quickly without any kind of cellular maintenance.

It's not like any animal or plant really totally shuts down during a hibernation/dormancy/brumation/aestivation. There's still some metabolic processes occurring, which leaves open the possibility for a gradient of activity.

So: Can you make your succulent just a little bit dormant? Yeah.

Is there a reason to? Not unless it's necessary for flowering or something.

How to Care for a Dormant Succulent

Dormant plants are not actively growing. They need less of everything, but they still need a little.

This is the thing that should change the least.

Succulents still want plenty of light, even in their dormant state. If the average amount of light a succulent should receive is about 12 hours a day (and it is), it can be reduced to 10 or even 8 hours.

This is the big one. When a succulent is dormant, it needs significantly less water. Overwatering is a common problem for new succulent owners, and dormancy exacerbates the issue.

The rule of thumb I use is to water succulents half as often as you normally do during their dormancy season. As with any change in care, closely monitor their health for changes.

Use this as a reference, but not an absolute guide. Individual species may have different dormant seasons than the rest of their genus (although genus-level dormancy is a good place to start).