I bet you didn't expect a linguistics lesson on a succulent site! Well, Sublime Succulents is all about education - so sorry if you don't like it. You'll just have to succ it up!

Bad puns aside, this is an oft-encountered issue. Echeveria are some of the most common (and beautiful) of succulents. They've got that sexy symmetry and perfect plumpness that defines the succulent family.

You know why we use Latin names - to prevent the confusion that comes from common names. People call the same thing lots of different names, usually depending on where they're from. The worst offender for multiple common names, in my opinion, is the pill bug/sow bug/roly-poly/wood louse/whatever. That little terrestrial crustacean has about 100 names.

Echeveria is the genus of plants that contains such beauties as Echeveria pulidonis "Esther" and Echeveria "Abalone". The common name for Echeveria is "hens and chicks", due to its propensity for sprouting offshoots that crowd about the base of the mother plant (much like a mother hen and its chicks). 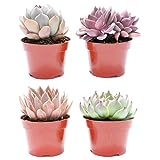 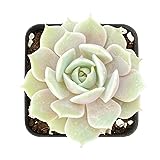 You might know, astute succulent enthusiasts that you are, "hens and chicks" is also the common name for Sempervivum - an entirely different genus of plants! The reason for this double naming is that Sempervivum also have that lovely habit of producing lots of offshoots. To tell the difference between the two genera (plural of genus) is not difficult, here are some tips on how to distinguish Echeveria and Sempervivum.

How to Pronounce Echeveria

Anyway, back to the main event. We've got this Latin word, Echeveria, and we need to know how to pronounce it. After all, any good conversation should include the word "Echeveria" at least once.

The only contention over the word is in the pronunciation of the first syllable - "ech". Do you pronounce it as "etch" or as "ek"?

Turns out, this is a bigger debate than you thought.

See, Latin doesn't actually have that soft "ch" sound that we have in English, like in "chore". When a "ch" shows up in Latin, it's usually because they borrowed a Greek word with the letter "chi" (pronounced kai). And indeed, in Latin, "ch" is pronounced hard like our English "k".

So that's a point for the "ekeveria" pronunciation. What about "etcheveria"?

Interestingly, the genus Echeveria is named after an 18th century Mexican botanical artist - Atanasio Echeverría y Godoy. That name, Echeverría, is still around today in several forms. It's pretty common, actually. And they definitely pronounce it with that soft "ch" (or "sh") in Spanish.

The real problem here is that Latin nomenclature isn't strict enough. Modern Latin nomenclature is a mixture of Latin, Greek, and neo-Latin (modern words made into Latin). The pronunciation differs depending on who's saying it. The genus for pine trees, Pinus, is always pronounced "pai-nus" even though (strictly speaking) it should be pronounced like "penis" (stop giggling).

Heck, they even have books for figuring out botanical Latin.

There is no absolutely definitive answer, unfortunately.

You have the option to be a Latin purist and use that 'k' for "Ekeveria".

Or, you can consider the circumstances of its naming (and our current language conventions) and go with the soft "ch" sound for "etcheveria".

To be fair, most sources I could find used the second pronunciation: Here are some examples.

See also
Is Aloe Vera a Succulent or a Cactus: A Deeper Dive Into Aloe

Frankly, in my opinion, "etcheveria" sounds better. It has a rounder, less harsh sound - which fits the character of the plants much better.

So that's it, folks, I'm calling it: the official stance of Sublime Succulents on the pronunciation of Echeveria is "etcheveria".

What do you think? Why? Tell us below in the comments!