Aside from gifts and quality time spent with the family, the holidays can also mean another thing. For us, it signals that homes will become more vibrant because holiday cacti will start to bloom.

Of the many holiday cacti you might come across, there’s one type that seems to enjoy being a mystery to many. Is Christmas cactus a succulent? If not, what is it really?

What Is a Christmas Cactus?

With the holidays just around the corner, a lot of green thumbs are asking this question. When you see or hear the word cactus, your mind probably pictures a green, upright plant with thorns protruding from the stem in the middle of the desert. We don’t blame you. After all, this is the most common image for a cactus.

Did you know that there are different varieties of cactuses? Some of them can even grow inside your home. Take, for example, the exotic-looking Christmas cactus.

Unlike other cactuses, this plant requires a constant water supply to imitate its natural habitat. Christmas cactuses grow in tropical rain forests, which is why you should water them as soon as the soil runs dry.

Make sure that you are also careful when propagating them. Despite being classified as a cactus, this plant thrives in humid environments. In fact, it will only produce flowers when they’ve been in the dark for 13 to 15 hours and the temperature is around 50 degrees Fahrenheit.

Is Christmas Cactus a Succulent?

Succulents are generally described as plants that can efficiently store water, causing them to have thick and fleshy leaves. Some plants do this to survive drought, while others simply have an abundant water supply that leads them to do the same.

There are a few differences between a cactus and a succulent, and the Christmas cactus can be classified as both. Taking care of a Christmas cactus requires a lot of attention, especially if you want them to bloom on Christmas.

Why Is It Called the Christmas Cactus?

This succulent from the Schlumbergera family blooms from November to late December. Because they produce flowers on yuletide, they got the name Christmas cactus. In some cases, a Christmas cactus blooms up to early January. 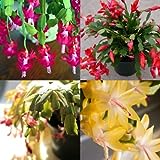 Can Christmas Cactus Bloom in Different Times of the Year?

Yes, of course. In fact, that is what differentiates them from many other succulents that can only bloom in a specific season.

Despite the name, Christmas cactuses can produce flowers even if it’s not yuletide. If you can provide the optimal conditions for this succulent, a Christmas cactus can also bloom in spring.

The Christmas cactus shares a few similarities with other succulents under the Schlumbergera family. Because of this, they are also capable of producing flowers in the same season as the other holiday cacti.

Where Did the Christmas Cactus Originate?

It’s relatively easy to mistake the Christmas cactus for other types of holiday cacti. While some people think the Schlumbergera truncata is the real and original Christmas cactus, it’s not true.

The scientific name is from William Buckley, who cross-bred these two species from the Schlumbergera family in England. Then, it soon found its way to the other regions in the Northern Hemisphere.

If you ever find an article that discusses a plant called Schlumbergera bridgesii, it’s actually the same as the Schlumbergera x buckleyi. A publication misidentified the plant, and only in 1964 did they find the true origins of this succulent.

Now that we’ve mentioned it, you might be interested to know that there are other holiday cacti you may find everywhere. All of them got their name from the season for which they bloom or produce flowers.

A Thanksgiving cactus, as the name suggests, blooms during the Thanksgiving season. It means you might start to see flower buds on this succulent as early as October.

Sometimes, it may also produce flowers from November to December. As such, some people mistake them for the Christmas cactus.

Another type of holiday cactus and also from the Schlumbergera family, is the Easter cactus. This succulent typically starts to produce flower buds in February and will grow fully from March to May. Hence, the best time to propagate and provide extra care for the Easter cactus is during the spring season.

How to Differentiate the Three Cacti

The season in which they produce flowers will probably be enough to differentiate the three holiday cacti. However, there are also other ways to determine which one is it that you have.

The Christmas cactus grows red, white, or sometimes yellow flowers. Plus, it has purplish-brown anthers. On the other hand, the Thanksgiving cactus has the same color as flowers but sometimes produces pink ones.

The flowers of the Thanksgiving cactus are asymmetrical, and the anthers are yellow. In comparison, an Easter cactus’s flowers are pink, red, or purple. Also, they are significantly brighter than the other two holiday cacti. Additionally, you will find that the Easter cactus produces star-shaped flowers, unlike the Thanksgiving or Christmas cactus.

Aside from the flowers, you can also observe their leaves to know which is which. Both the Thanksgiving and the Christmas cactus have claw-shaped leaves since they’re both from S. truncate family.

Unlike the Christmas cactus, the Thanksgiving cactus has pointed and thorn-like projections around the edges. On the other hand, the Easter cactus has narrower leaves and round edges.

Is Christmas cactus a succulent? We already know that it is, but why is it called that way? Given the right conditions, you can expect your Christmas cactus to bloom before December ends. They can also bloom in spring, but they require more maintenance if that’s your goal.