Don't be embarrassed; it's not a dumb question!

Everyone has to ask about the difference at some point. Are cacti succulents? I didn't figure it out until I was already a year into my obsession. Now that's how you look dumb.

I was surrounded by these fat plants and I just thought everything with spikes was a cactus.

It's a good guess, but not quite accurate. Here's everything you need to know about the difference between cacti and succulents.

What's the Relationship Between Cacti and Succulents?

You've heard this one before: All squares are rectangles, but not all rectangles are squares.

It makes sense, but it takes a second to understand. That's why I prefer this one: All huskies are dogs, but not all dogs are huskies.

In much the same way: All cacti are succulents, but not all succulents are cacti.

Let's take a step back, though. We need to cover some definitions.

Read Related Topic: Where can I get some succulents?

Part of the confusion stems from the fact that "succulent' isn't a scientific term. There's no "succulent" family on the phylogenetic tree.

"Succulent", then, is a catch-all term for any plant that has adaptations to store water in its leaves, stem, or roots.

These characteristics aren't confined to any particular taxonomic group or family of plants.

For example, the family Aizoaceae contains all of our favorite mesembs (like lithops, baby toes, and ice plants) and it also contains New Zealand Spinach.

That's clearly not a succulent (even though it looks like it would taste succulent on a nice salad). 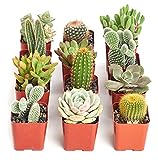 Here are some cute baby toes (the plant kind, obvs).

Those are closely-related plants, although one is quite clearly not a succulent.

Now you see that the term "succulent" is an informal attribute, rather than a group of related plants?

Good! Now we can talk about cacti.

When you hear the word cactus, the mind invariably summons the image of a stoic saguaro. There's probably also cowboys associated with that image if you're anything like me.

And that's correct - saguaro is cacti. A very stereotypical cactus.

Unlike succulents, "cactus" is a defined family. Every plant that's a cactus is included in the Cactaceae family.

Defining characteristics of cacti are their spines, obviously, a lack of leaves, and the ability to survive drought. But none of those are significant differences - lots of succulents share those traits.

What makes a cactus a cactus is one single attribute - the areole.

No no, I didn't say areola (get your mind out of the gutter). We're talking about areoles which, admittedly, share a similar shape.

The areole is a specialized structure unique to cacti. It's actually a modified, highly specialized branch or shoot. It ends up looking like a lighter-colored, circular bump of a different texture on the surface of a cactus. Here's what I'm talking about.

While very pronounced on an Echinopsis, they're not quite so obvious on every other cactus. Spines or hairs radiating from a single point is usually a good indicator that it's a cactus.

Euphorbia plants are NOT cacti, though they tend to have spines similar to them. They lack the areoles of a cactus. Here's a Euphorbia for comparison.

It's hard to tell the difference, I know. Notice that the base of the spines on this Euphorbia has the same texture and quality as the rest of the plant. That's your best indicator.

Of course, there are many different kinds of cacti. Some are hairy instead of spikey. Some don't have anything growing out of their areoles.

The ubiquitous Holiday Cacti are a good example. Many cultivars you see in homes don't have been bred not to have spines. Occasionally, you'll find some that do have spiky hairs. Their areoles are at the tip of the "leaf" (it's a stem, actually) and sometimes between lobes.

All cacti are considered or are succulents but not all succulents are cacti.

Both are closely related due to similarities but there are also some differences between the two such as:

Care Differences Between Cacti and Succulents

We're talking about tens of thousands of species of plants between the two groups, so any sort of specific care is impossible to give.

Generally, cacti drink less water than some other succulents. But then, of course, Holiday Cacti are known to drink water right up.

Usually, a cactus loves full sun, too. But epiphytic species (ones that grow on other plants or structures) like the orchid cactus, don't tolerate it so well.

The basics of succulent care apply to succulents and cacti alike. Infrequent water, lots of light, and well-draining soil.

Do you have any further questions about differences? Does this article answer your inquiry "are cacti succulents?" Or, do you have tips to tell them apart? Comment below!