Mushrooms growing with my succulents – Is that bad?

It happens to everyone eventually. You see a little yellow or white mushroom emerging from the soil and you start to freak out – “Why is there a mushroom growing next to my cactus!? Will my succulent die?? Is the mushroom eating it?!”

Don’t worry. You’re (probably) fine, and so is the succulent.

Why are there mushrooms growing with my succulents?

I’ll cut to the chase. If there are fungi growing in the same pot or ground as your succulents and cacti it means that the soil is too moist.

The vast majority of fungi (mushrooms, molds, mildew, etc.) absolutely require a damp environment. Their mycelium, which is kind of like plant roots, is very fast to wither in dry conditions. Here are some other conditions fungi thrive in:

Are mushrooms harmful to my succulents?

No, not usually. Most fungi, especially the ones that pop up in your pots, are not harmful to plants.

As a matter of fact, they’re probably beneficial. There are lots of species of fungi that form what is called a “mycorrhiza” – a symbiotic relationship between a fungus and a plant’s roots. The fungus (aided by some bacteria) turns nitrogen into a form usable by plants – and shares it with the plant through their roots! It also helps to protect the plant from infection by acting as the first layer of defense against soil pathogens.

In return, the plant shares the sugar it creates through photosynthesis with the fungus. This mutually beneficial relationship is staggeringly widespread. Scientists estimate that up to 90% of the world’s plants have a mycorrhizal relationship with fungi.

So to reiterate, no, the mushroom you see won’t hurt your succulents or cacti. It could even help it, but…

Your succulent would almost certainly be better off without it.

By creating an environment which allows mushrooms to flourish you’re inadvertently harming your succulents. That damp dirt is likely slowing succulent growth and possibly even putting it at risk of root rot. The benefit the fungus might give is not worth the danger you would be putting your succulent in.

How to prevent mushrooms growing in my pots.

Even though we’ve established that the mushroom probably aren’t harmful, some people don’t want them growing alongside their succulents anyway. Perhaps they think mushrooms caps are unappealing… or it’s a constant reminder of their failure to water appropriately 😉

Here are a couple ways to prevent more mushrooms from popping up in your plant pots.

Had the succulents been watered correctly in the first place, it’s unlikely the mushrooms would have ever shown up! Chances are that you need to reduce the frequency of watering, not the amount. A good rule of thumb is to water succulents and cacti about once every 10 days, but that can vary. Read up the best practices with this in-depth guide to succulent watering.

Even if you’ve got watering down perfectly, bad soil can still foil your attempts at good succulent parenting. Soil that is too rich in organic matter tends to retain a lot of water, keeping the dirt wet for days. That’s a recipe for both fungi and root rot.

You need to use a grittier soil. That means a soil mix with more large inorganic particles (like perlite or turface) and less organic material (compost, peat moss etc.) You can make it yourself (here’s a guide about soil including a recipe for succulent soil). There are also commercially-available gritty succulent and cacti soil – the best one is Bonsai Jack hands down.

Check out Bonsai Jack on Amazon! Click the pic!

How to remove mushrooms growing in my pots.

Preventing mushrooms is all well and good, but if they’re already there… what is an anti-fungi (maybe even anti-fun guy) to do?

It’s a little more difficult than you might think to get rid of a fungus. It’s not as simple as plucking out the mushroom. The reason for the difficulty has to do with their unusual anatomy.

You see, most of a fungus actually lives underground. The bulk of the organism is made up of “mycelia” (plural of mycelium) which are basically like plant roots and stems all rolled into one structure. The mushrooms that we are so familiar with is actually just the reproductive organ of the fungus – it’s analogous to a plant’s flower. Just like flowers, they show up every now and then, live for a few weeks, then die.

Even when a mushroom isn’t there, the fungus is still doing it’s thing underground. We rarely think about it, though, because “out of sight, out of mind”.

Even if you destroy all of the mushroom you see, it won’t harm the body of the fungus (the mycelia). There’s also no realistic way to remove mycelia from soil – it’s so fine and so well-ingrained that you could never remove all of it.

If you want to get rid of a fungus, you’re going to have to throw out the soil.

That’s not a huge deal – succulents really don’t mind being repotted. It is an inconvenience to get new, sterile soil however. To be totally clear: most soil, even commercial ones, probably already have bits of mycelia in them which, like succulent leaves, are able to regrow the whole organism. In order to kill any fungus or other soil pests, you’ll need to sterilize the soil before you use it. The simplest way is to spread it in a baking sheet and put the soil in the oven at 250 degrees F for 15 minutes.

If you’re serious about those dang mushrooms, you may want to use a fungicide.

It really shouldn’t be necessary – between good watering techniques and good soil composition, mushrooms shouldn’t ever show up. If you want the mushrooms gone now and you’re not in the mood to repot, you’ll need one of the many available commercial fungicides. Follow the directions on the packaging, but in general you need to dilute it with water and then soak the soil containing fungi.

You don’t need to worry about the plant – fungicides won’t harm plants, although some of them are lethal to insects. Don’t use it on outdoor plants. You will kill the native fungi which is bad for your soil health and may possibly harm beneficial insects as well.

How to Water Succulents Without Drainage

While it’s generally recommended to grow succulents and cacti in[...] 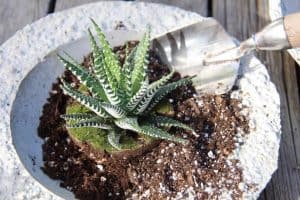 Choosing the correct soil for your succulents and cacti can[...]

The Complete Guide to Grow Lights for Succulents

There comes a point in every succulent addict's journey where[...]

Thank you for such an excellent, clear article! Now I’m off t o re-pot my succulent…

Glad it helped! Best of luck, I’m sure your succulent will be grateful!!

This article is very informative! Thank you!

Glad to be of help!